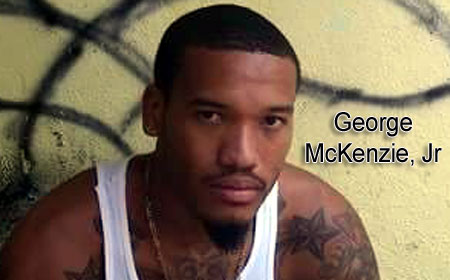 George Mckenzie, Jr., 21, like his father, was listed as a main suspect in several criminal incidents being investigated by police, and was even remanded in 2014 for attempted murder. However, unlike his father, this student of Wesley sixth form, athlete and father to one daughter was never convicted of anything.

His father, George “Junie Balls” McKenzie, was slain on August 27, 2007, and hours after the 9th anniversary of his death, McKenzie, Jr., also lost his life.

McKenzie, Jr., and his girlfriend, Shereffa Jex; his brother, Kiffer McKenzie and friend Michael “Pancho” Usher, all from the Majestic Alley area, had gone to a soca concert held at the ITVET compound in Belize City on Saturday night.

His girlfriend indicated to police that she saw Shane Douglas Harris, also known as “Mud,” of a George Street address, bump into Mckenzie and thereafter, an altercation between the two ensued.

The altercation turned into a brawl in which George Mckenzie, Kiffer Mckenzie and Michael “Pancho” Usher fought initially against Shane Harris, Akeem and Shakeem Humes, Christian Robateau and Elwin Pollard, according to police information.

Police reports name Gevon Clare, Mark Phillips and Henry Harris as also having been involved in the brawl.

According to police information, McKenzie was being crowded by Shane Harris and his associates while another group of men pinned his younger brother to the ground, beating him.

When the beating stopped, Kiffer McKenzie got up to find that his brother had been stabbed repeatedly, 9 times, in fact.

He was immediately rushed to the Karl Heusner Memorial Hospital (KHMH), where he had gone into an induced coma, but by 2:32 a.m. on Sunday, August 28, while receiving treatment, he was pronounced dead by Dr. Manuel Gutierrez.

CIB police had been called to the hospital at about 1:40 a.m, and a suspect in police custody has since denied stabbing, or even seeing the deceased stabbed.