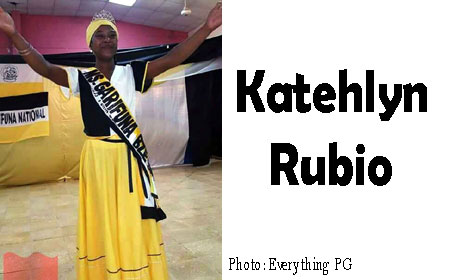 PUNTA GORDA, Toledo District, Mon. Nov. 7, 2016–This year’s Garifuna Settlement Day celebrations are being held under the theme: “Garifuna: Rísiti, Pántati, Gabafuti. Iúrahowa meme la – Garifuna: Rich, Proud and Powerful. Let us continue to preserve it”. A highlight of the annual celebrations, founded in 1941 by Thomas Vincent Ramos, is the annual Ms. Garifuna Belize Cultural Pageant, which showcases Garifuna talent, beauty, culture and history. This year, though, the winner of the pageant used the platform to put the spotlight on a burning national issue.

Katehlyn Rubio, 18, of Punta Gorda (‘Peini’ in Garifuna) in the Toledo District, captured the title of Miss Garifuna 2016-2017 on Saturday night, November 5, after a stellar display of garifunadüaü—the rich essence of the Garifuna culture—and delivering a compelling message for her main item on pageant night, calling for peace between Belize and Guatemala, and especially at the Sarstoon River, the country’s southern border where there have been numerous conflicts between Guatemala’s military and Belizeans, both civilians and armed forces.

The divisive conflict is a grave concern for the wider Garifuna community, which spans the borders of Nicaragua, Honduras, Guatemala and Belize.

In an interview with Amandala today, Miss Rubio reiterated her call for peace at the Sarstoon, as a means of strengthening unity across borders, and in particular the Garifuna communities in both neighboring counties.

She describes the current situation as a “calamity” separating people from the two different sides.

At the pageant, she was asked about the need for the resolution for the controversy between Guatemala and Belize. According to the National Garifuna Council, there are about 4,000 Garinagu living in Guatemala. Livingston is the main Garifuna community in that country.

The dispute needs to be resolved so that Garinagu from both sides can join in Belize’s November 19th celebrations and so they can come here to see our traditional way of living, as a means of strengthening the culture, Rubio expressed.

This Garifuna young woman lived in Belize City until age 6, when she migrated to Punta Gorda to live with her extended family there. She said that she first became interested in the Garifuna culture and history when she began living in Peini, with her aunt Mary Sanchez and grandma, Fedelis.

“I got to learn about Garifuna food and lifestyle as well as the history, and I gained confidence since then,” Rubio told us.

She said that the Punta Gorda community helped her to prepare for her victory night, including Hazel and Lucy Cayetano of the Peini branch of the National Garifuna Council.

Rubio won the PG Miss Garifuna Pageant on October 29, and her community believed that she could secure the national win for PG. Lucy Ellington and Nanigi Bernardez, who also competed in the local pageant, helped her to prepare for the national pageant, Rubio told us.

“Everyone saw it in me and they supported me on the night,” she said.

Rubio told us that her strongest segments were the introduction and main items, which she used as an opportunity to build communication with the judges and audience. The pageant winners also need to display grace and dexterity in performing traditional Garifuna dances such as the Punta, Gunjai, Hungu Hungu and Chumba.

Among her strongest competitors were Kaylin Mejia of Dangriga, who won second place, and Sobrina Solano of Hopkins, who won third.

Miss Garifuna 2016, Katehlyn Rubio, is an employee of King’s Service Station in Punta Gorda. Her next aim is to attain a degree in natural resource management from the University of Belize – a program which she plans to begin in January 2017.