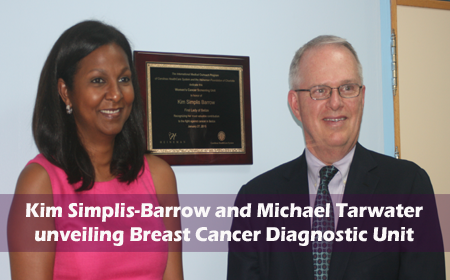 BELIZE CITY, Tues. Jan. 27, 2015–A brand new Breast Cancer Diagnostic Unit, which was made possible through a donation by international partners of the Karl Heusner Memorial Hospital (KHMH), was officially opened to the general public today.

The new unit – which is inclusive of mammography and integral imaging equipment – is expected to boost the services provided by the country’s premier public health institution, and today, in the presence of KHMH executives, as well as representatives from the Belize Cancer Society, the Carolinas Healthcare System, and the Heineman Medical Outreach Foundation in Charlotte, North Carolina, USA, the unit was dedicated in honor of Special Envoy for Women and Children, Mrs. Kim Simplis-Barrow, who, in her address, underscored the importance of having a Breast Cancer Diagnostic Unit.

She said, “The need for this unit cannot be overstated. For the period 2007 to 2011, breast cancer accounted for 12% of cancer deaths among women. The introduction of mammography and an ultrasound-guided biopsy system will support the early detection of breast cancer, which can save lives. The availability of breast screening and diagnostic services at the national referral hospital represents a major step by the KHMH. Women will have access to affordable screening and diagnostic services.

“I know that a cancer diagnosis is a very scary thing to face, and it is the last news anyone would want to receive, but I also know that the strength needed to fight cancer comes from acceptance of this diagnosis, as well as knowing that services are available and accessible. The goal should be to reverse the trend of late diagnosis of breast cancer.”

According to KHMH Director of Medical Services, Dr. Lisa Johnson, the donation of the Lorad M-IV Series Mammography Unit, which comes with workstation and storage capacity, a CR-Reader, an ultrasound machine, and the Mammotome Biopsy System, is worth “something in the neighborhood of US$100,000.”

Patients will access the unit on the basis of referral, as is the case for any other service offered by the KHMH’s imaging department, and KHMH Chief Executive Officer, Dr. Adrian Coye, told the audience about the features of the unit, and its benefits in the detection of breast cancer.

“As in every other imaging service in the KHMH, the accessibility will be on the basis of referral, so it can be from the different clinics, it can be from private practice, or NHI because we hope that this will be fed into the NHI system,” he said.

“This room was a dinosaur, but we took out the equipment and retrofitted it. What we have will be diagnostic ultrasound equipment that can be used for other types of conditions, and so that with ultrasound, you can diagnose a legion, and with ultrasound guidance, you can aspirate from a breast legion or any other organ that is external and accessible by ultrasound, but combining that with mammography – which is an X-ray imaging – you have a greater yield as to what the pathology or problem is that you are looking at, and it helps you to distinguish exactly what is what, so in terms of the range of services you diagnose, you screen and you can take samples”, explained Coye.

Coye added that the Carolinas Healthcare System has committed to assisting not only with the establishment of the services, but also with technical assistance and short-term maintenance.

The Carolinas HealthCare System and Heineman (International Medical Outreach) have been in partnership with the KHMH since February 2011, and Michael Tarwater, CEO of the Carolinas Healthcare System, cited that they are “privileged to be part of the great effort to facilitate the opening of this Breast Cancer Diagnosis Unit…”, while System Fernando Paiz, Vice President of the Heineman Foundation in Charlotte – a charity foundation that is allied with the Carolinas Healthcare System –mentioned that they intend to have a long-term relationship with the KHMH, during which they will continue to support future initiatives of the hospital.