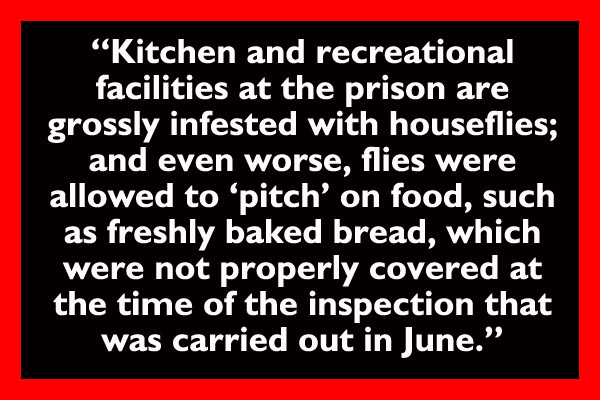 Amandala has received reliable information that Belize Public Health Authorities have filed a damning report declaring that the female holding cell facilities, as well as the kitchen facilities at the Belize Central Prison, run by Kolbe Foundation, are largely unsanitary for inmates.

Health authorities have called on the management of the prison to undertake swift corrective action, and we understand that they have given their commitment to make improvements.

Health authorities found that the kitchen and recreational facilities at the prison are grossly infested with houseflies; and even worse, flies were allowed to “pitch” on food, such as freshly baked bread, which were not properly covered at the time of the inspection that was carried out in June.

Health inspectors note that houseflies can be carriers of infectious diseases such as typhoid, cholera, salmonella, tuberculosis and anthrax.

It calls on prison authorities to immediately take measures such as screening, proper garbage disposal, and sealing sewage cracks in order to improve sanitation.

The health authorities note that the broken septic tanks which they found onsite can serve as a breeding ground for mosquitoes, and also attract the same flies which infest the facilities. They also point to the risk of the transmission of dengue and malaria, as a result.

Health authorities emphasize the need to improve the storage of food, pots and pans.

As for the female facilities, the health report also points to inadequacies there as well.

Although we were not apprised of reports on the male facilities, we are aware of health concerns in relation to these facilities.

On a previous tour at the prison, we observed firsthand scenarios where inmates were housed in cells where toilets are affixed right next to their beds.

On a positive note, samples of potable water taken showed no bacterial contamination.