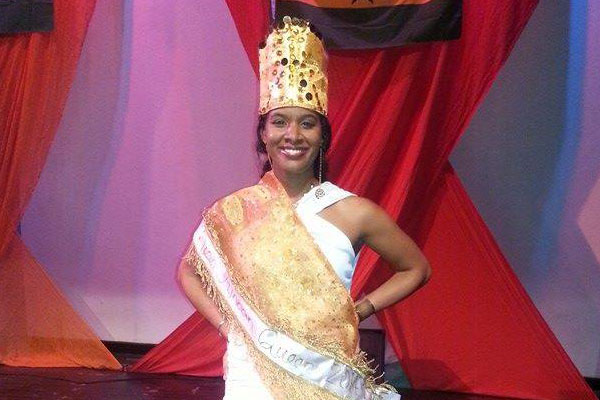 Last Saturday, the 6th edition of the Miss African Queen Pageant took place at the Bliss Center for the Performing Arts in Belize City, and Krem TV’s news anchor Maryam Abdul-Quawiyy emerged as the winner of the contest in which five other participants also vied for the title.

During the pageant – which was organized by the advocacy group “Concerned Belizean Women” – the six delegates displayed their passion and knowledge of African Heritage through historical and cultural presentations while showcasing a measure of poise and elegance which had to be proven worthy enough to take home the crown for this year’s competition.

In the end though, there could only be one winner, and Ms. Abdul-Quawiyy walked away with the crown.

Today, she told Amandala that it was important for her to take part in the pageant because young black Belizean women need to see more examples of people like themselves doing something positive and gaining respect.

The new queen, who represented the country of Egypt, believes she was able to win the judges’ favor because of the content of her presentations which were focused on the dynasties of the former black kings and queens of Egypt, a place which she has affinity to, especially because, she explained, after research, she discovered that it was the birthplace of her ancestors.

Apart from a lot of practice and hard work, she elaborated on what made her presentations stand out. “It could have been that I am naturally an artist and performer, so I’m used to being on a stage in front of people and I learned how to be comfortable and be myself in front of the audience”, Abdul-Quawiyy stated.

As Ms. African Queen 2014, the young and vibrant queen plans to promote African culture and history and to honor her ancestors by taking part in other programs organized by Concerned Belizean Women, including helping the less fortunate, which is something she said she is very passionate about.

Abdul-Quawiyy received $500 in cash, a gold ring, and a life insurance policy, among other prizes for her victory. She also won in the categories for Best Talent, Public Relations and Marketing.