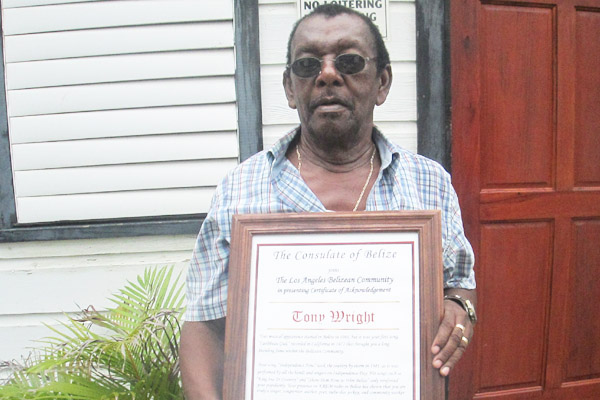 Wright was honored for being a singer, songwriter, artist, poet, community worker, activist and radio personality

The award-winning musician and entertainer, Tony Wright of KREM Radio, has again been awarded for his continued musical contribution and promotion of Belizean music. This time he was acknowledged as a songwriter, singer, artist, poet, community worker, activist, and radio personality at the Los Angeles Caye Fest 2013, at the Hollywood Park Casino.

The Certificate of Acknowledgement was presented by the Consulate General of Belize to California, honorable Roland Yorke. The presentation was made on Sunday, July 7, on the Caye Fest stage in front of hundreds of people who went to the fest to enjoy the various performances. Wright had travelled to Los Angeles to co-host the Caye Fest and to entertain the audience.

The award acknowledged Wright’s prolific work in the field of music, which started in 1966 in Belize. His first recording was made in California in 1971. It became a hit, and his popularity rose. Wright later recorded other hit songs like “Independence Now” in 1981, which was performed by many bands and singers on Independence Day.

Wright was also acknowledged for his continued promotion of Belizean music, and his work as a radio personality on KREM Radio,

Wright said that he was more than surprised by the award, which was unannounced, and was not a part of the program.

He said that the Consulate General walked up onto the stage and made the announcement that he had an award to present. He then made the presentation to him. Wright said that he was happy to be honored in such a way, and he will continue to entertain the public, promote Belizean music and champion the cause of Belizean musicians through his organization, Belizean Artists First. He advises Belizean musicians to promote themselves firstly as Belizeans.