Kriol version of the New Testament is now available 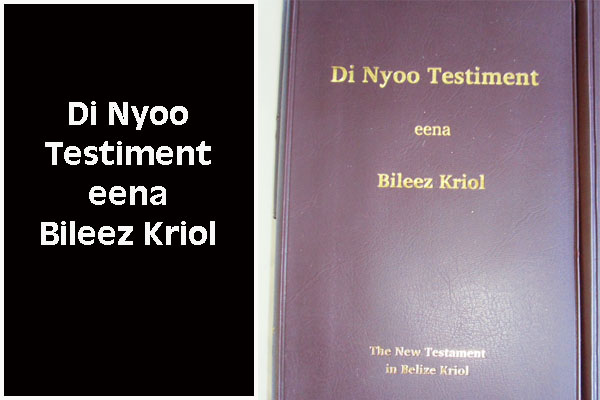 The ceremony was done in Belizean Creole, including singing of the National Anthem and song presentations. Selected persons were invited to read scriptures from the “Kriol Baibl.”

Supporters of the new Bible version said that it makes the word of God more powerful to Belizean readers because it is in their language and they can better relate to the messages of the word.

Governor General Sir Colville Young, who is also a linguist and writer of Creole songs performed at the launch, said that he believed that the Bible needed to be translated into Creole.

“Kriol is the common language of the people of Belize and the word of the Lord should be in their Kriol language,” he said.

Artist and radio personality Lauren Burgess was also in attendance at the launch to endorse the new Bible version. Burgess brought laugher to the room as she told anecdotes of encounters she has had involving the use of the Kriol language. She told the attendees that she loves and believes in her Kriol. Burgess said that “today is a day of great joy” and she never saw it coming.

The Creole Bible is available in print and electronic versions. For those who might find the language a bit difficult to read, the Kriol Baibl is available in audio format. The voices of different individuals are featured on the CD version of the Creole Bible, including Lauren Burgess, who does the voices of Mary and Sapphira, and Rene Villanueva, Sr., of Love FM, who does the voice of God.

The printed version of the Creole Bible is now on sale at the Belize Bible Society for $20 and $25. The CD version is on sale for $5. The electronic version can be downloaded for mobile phones at Bible.is or online at the Faith Comes by Hearing, and choose the Belize Creole version of the New Testament.