Kulture Yabra leads at Week 4 of National Over-40 Tournament 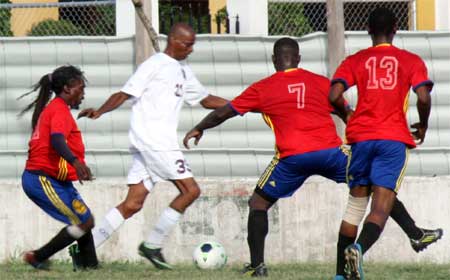 BELIZE CITY, Thurs. June 29, 2017–The inaugural Belize National Over-40 Football Tournament 2017 completed its fourth week of games over the weekend, and two undefeated teams, Kulture Yabra and Mango Creek Veterans lead the standings, with Kulture Yabra in first place with 7 points, followed by Mango Creek Veterans in second. But the race is tight, as Mango Creek is also tied at 6 points with Benque Vets FC and BDF Veterans. And two others are right behind with 5 pts each – San Pedro Veterans and Belmopan Veterans. (See standings below) 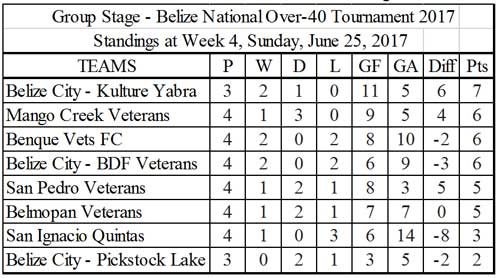 Two games each were played on Saturday and Sunday over the past weekend.

On Saturday afternoon at the MCC Grounds, Kulture Yabra bombed the visiting Benque Vets FC, 6-2, with Kevin Rowland exploding for 5 goals and the other by David “Manu” McCaulay; while Benque got a goal each from Josue Canales and David Aldana. Later in the night at the San Pedro Stadium, the San Pedro Veterans were held to a 0-0 draw by visiting Mangro Creek Veterans.

At the Norman Broaster Stadium on Sunday afternoon, visiting Belmopan Veterans got a goal apiece from Garry Wiltshire, Amilcar Umana and Micky Chavez, to take a 3-nil victory over home standing San Ignacio Quintas. Meanwhile, at the MCC Grounds it was BDF Veterans, 2-0, over Pickstock Lake, courtesy of a penalty conversion by Erwin “Bird” Flores and an own goal by Lake’s Kenrick “Crane” Major. Entering the game in second half without a proper warm-up, Crane had a bad outing, colliding with BDF striker Joel Wade to cause the penalty, and then trying to stop a centering pass from the left wing, and instead diverting it past his goalkeeper Aaron Buckley for an own goal. It was otherwise a very keenly contested game, with Ralph “Sherlock” Martinez also entering the game in second half for Pickstock Lake, and creating many anxious moments for BDF goalie Louis Lucas, who eventually had to leave the game with a strained hamstring. 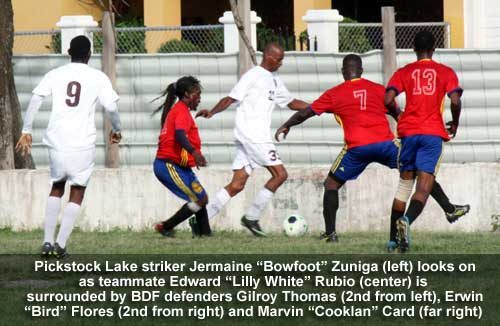