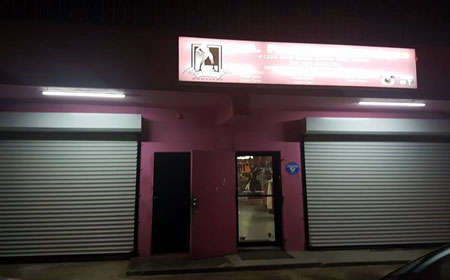 BELIZE CITY, Thurs. Nov. 24, 2016–Sometime before 9 p.m. tonight, an attempt was made to rob the LA Fashions Boutique on New Road in Belize City, which was in the process of closing for the night.

However, according to police, the assailants left empty-handed after they ransacked the place and held the cashier hostage in the process.

The failed robbers then scurried off into a waiting taxi which had brought them to the boutique.

Information to Amandala is that the men in the taxi then turned onto Douglas Jones Street, where they are believed to have shot a security guard at JL’s Pawn Shop.

According to information from police, the security guard was shot in his right arm and is currently receiving treatment at the Karl Heusner Memorial Hospital.

While information is scanty at this time, we have been told that police are relying on surveillance camera footage to identify the men who tried to rob the boutique.