Labor Commissioner of 9 years, Ivan Williams, appears before the Senate 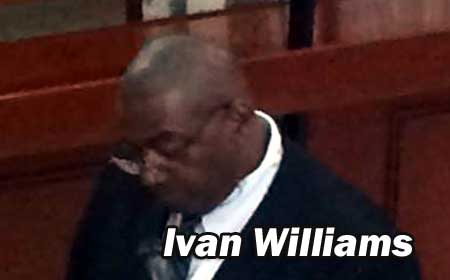 BELMOPAN, Cayo District, Wed. Oct. 18, 2017–The special audit of the Immigration Department has extensively documented cases of foreign nationals who were issued permits to work in Belize for the period 2011-2013. The issuance of those work permits has in certain areas reduced the prospects of employment for Belizean nationals.

Williams revealed that he could not account for work permits issued before 2010, as it was not until June 2010 that Cabinet opted for the Ministry of Labor to approve applications for work permits.

However, Williams was able to comment on the actions taken by his Ministry in light of work permits issued especially to Asian nationals.

Senator Salazar commented, “Commissioner, as a select committee we have been tasked with particularly looking at the issues that have come out of the report of the Auditor General in which any impartial observer will note that, and this is my view, any impartial observer should note that there is evidence of systemic problems with immigration. Part of it has to do with some sort of corruption in private sector and I feel some part in public sector.”

He further stated, “This is my view only. I think that the issue of immigration from Central America has not necessarily fed this corruption because, frankly, those people are too poor. The people who are coming here, those migrant workers, are too poor to feed that sort of corruption. That is being fed by a different type of immigrant.”

“I feel what we have seen from the report has particularly a large number to do with Asians, Asian immigrants. The incidents of wrongdoings that have been highlighted in there, the majority has to do with Asians … In terms of the migrant workers, for me I can say that we need that in Belize. I don’t see that we as a population are flocking to those jobs in the banana industry, in the citrus industry, so we need those migrant workers,” he added.

Salazar then asked if the Labor Ministry had any policy in place to counter those incidents.

“In the distribution sector of industry, in which we see immigration from Asia, is there a specific policy in relation to those types of people because, on my part, I would say we don’t necessarily need any more shop attendants, [and] clerks in Belize. Belizeans can do those jobs. Is there any sort of policy as far as that migrant issue is concerned?” he questioned.

Williams responded affirmatively. “Yes, one of the terms of reference of the national temporary employment permit committee speaks to that. They have the responsibility to suggest, to recommend areas for which work permits should not be approved, and I can tell you that shop assistants and shop clerks and so on are part of the recommendation, and so they don’t issue work permits in those areas.”

He added, “So there has been a move by the committee to exclude those areas. We don’t need any of those. Those are categories which the permit committee itself has been putting in place structures to eliminate gradually.”

However, Williams told the committee that this presents a challenge as there is a large turnover of business owners. “We need to look how we can minimize those instances,” he said.

After spending this morning before the Senate Select Committee, Williams was allowed to leave the sitting. The Senate continues its hearing on Wednesday, November 1, when former Immigration Minister Godwin Hulse is likely to testify.