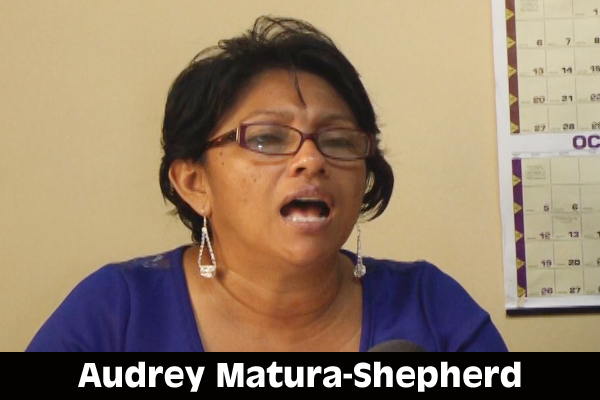 The Christian Workers Union (CWU), which has come to the aid of the 36 security officers of the Belize City Council’s Security Department who got their walking papers from the council in a meeting held on January 21, 2014, had some “good news” to report this afternoon.

In a press conference held today by president of the CWU, Audrey Matura-Shepherd, she declared that the Labor Commissioner, Ivan Williams, has intervened on behalf of the workers who have been laid off.

Matura-Shepherd stated, “The Labour Commissioner called the CWU office this morning and informed us that he had gotten all the correspondence. He was apparently out of office for a while, but he assured us that he would intervene because, based on what he was seeing, the Belize City Council had not complied with their statutory obligations to give all the notices they should. We had even inquired if he had gotten any notice as the Labour Commissioner, and we found out that [actually] he did not get any notice. You have to understand that not only should the union be told, but you must [also] consult with the Labour Commissioner by sending him the list with all the people that will be affected and let him know what is happening.”

Matura-Shepherd said that when the Commissioner informed them of his intention to intervene, they “considered it to be very good news.” Matura-Shepherd went on to relate that the Commissioner, based on her understanding, thereafter called the City Hall, and then went in person and spoke with the City Administrator, Candice Burke, but she reportedly informed him, according to Matura-Shepherd, that “she was not prepared to do anything [about the matter] because the Mayor [Darrell Bradley] was out [of the country]”.

“But,” noted Matura-Shepherd, “the Commissioner was very persistent and this afternoon about 2:45 p.m., he called me with very good news where he said that the City Administrator and the Deputy Mayor had been able to persuade the Mayor to put off the termination.” “That became effective today, and he will put it [the termination] off until we can meet and the Labour Commissioner can properly intervene”, added Matura-Shepherd. She also said that the Labour Commissioner informed them that he would be having a meeting with the council on Monday morning “to review with them the laws so that they know what [are] their obligations to review the procedures they followed.” “Thereafter a meeting with the union will follow and if all goes well then there should be a meeting involving all parties, so that we come up with a plan or a procedure that we follow to start negotiating for the workers,” she stated.

In the meeting that was held on January 21, the long-time staffers had received backdated letters that basically outlined that their positions would be made redundant today, Friday, January 31, 2014.

As a result of the intervention, however, this date has been postponed and the affected security officers are now to report to work as per their usual schedule.

According to Mayor Bradley, the City Council’s Security Department has been privatized as a cost-cutting measure. The contract for the security services has been given to Hiram Longsworth, the Council’s former Security Manager.

The 36 security officers were to have been hired by the new security firm, Rangers Security Company, of which Longsworth is the proprietor.

However, that was merely a verbal commitment, and the officers received no official letter of employment with the new security firm.

With their jobs lost and no new source of income in sight, the workers turned to their union, which has now brightened the prospects of the employees.

Matura-Shepherd asserted that, as a union, the CWU may not be able to protect the workers from certain changes, but they can certainly fight to make such transitions as equitable as possible.