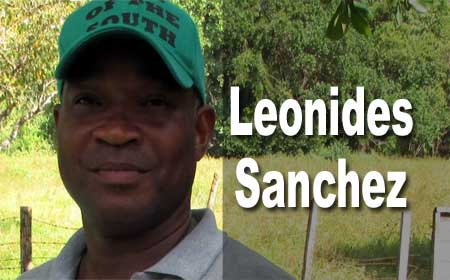 If we step aside for a moment and ask why there has been such deep sense of consciousness that has gone into the building of this model boat here called the “Black Star Line,” the only answer that would be warranted is that the artist, Leonides Sanchez of Belize’s southernmost town of Punta Gorda in the Toledo District, is a Belizean artist with an African-centered approach to life in general.

Being Emancipation Day, August 1, 2017 when Sanchez completed this masterpiece in wood in commemoration of the crime against humanity that brought his African ancestors to the shores of Belize, it would not have been possible to do if we consider the patience, skill and perfection that went into this work. But it was as if this artist was fighting against the stolen time and legacy that were not afforded his enslaved ancestors, and passionately pushed his artistic brilliance to the brink of their cry across the Atlantic. He was involved in his own war for freedom, pulling strength from five hundred years of memory that is embedded in his Garifuna soul. 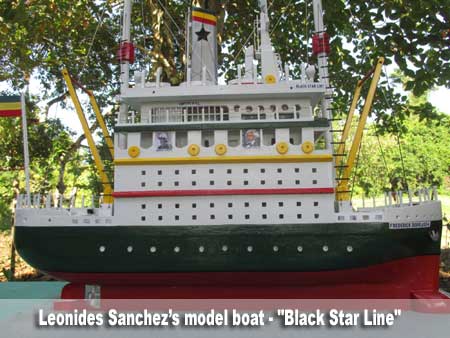 Leonides Sanchez, the Belizean artist extraordinaire, is no typical Belizean artist relative to those like the legendary George Gabb and those among the likes of his own father, Peter Sanchez, who taught him this master builder’s skill. His genes are the replica of those renowned African scholars of Mali, Timbuktu, Ghana, Egypt and Moorish Spain. His “Black Star Line” artistic phenomenon in shipwright is a perfect artistic feature that reminds Belize of what its vision for freedom could have been.

He is the Cheik Anta Diop of southern Belize pulling from a base of multi-disciplinary body of work that includes the arts, shipwright, engineering, botany, animal husbandry, architecture, and, of course, Afrocentric sciences. Belize, though his home, is just a cosmic reality of who he is that cannot be confined. He is a global citizen that creates his art in remembrance of his Garifuna ancestors who were brilliant shipwrights. And he creates art as we see here as a sacrificial symbol in honor of those African liberators of old like Marcus Garvey and Frederick Douglass.

Brother Leo’s art in celebration of Marcus Garvey’s “Back to Africa Movement” takes the liberated mind back across the Atlantic to the ancestral home of Africa in spirit and soul. He constructs four layers of this ship that includes a bottom deck that holds cargo, a second layer inscribed with the images of Garvey and Douglass that houses passengers, a third layer he named after the United Negro Improvement Association’s (UNIA) famous “Liberty Hall”, and a top layer that dazzles the inquisitive mind as to how this artist carved out such miniature life boats and intricate navigational system so neatly within a confined space. 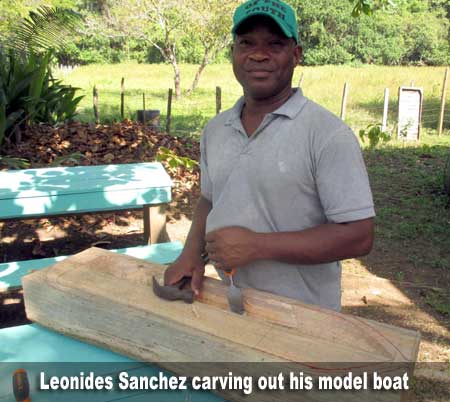 The painting of the miniature ship is spectacular, and embodies the African colors of liberation: red, black, gold and green. It is a symbolic mantra that was made into an African liberation anthem uttered in the words of Garvey himself who declared: “Red for the blood that flowed like a river, yellow for the gold that they stole, green for the land of Africa, and black for the people it was looted from.”

Belizean artist Leonides Sanchez’s artistic tribute to the martyrs of Africa came on the commemoration of Emancipation Day in Belize organized by the UBAD Educational Foundation (UEF). He rejoiced in the completion of the work since its inception almost a month ago, and prepares to share its beauty and splendor with the Belizean people across the land of Central America’s sleeping giant.