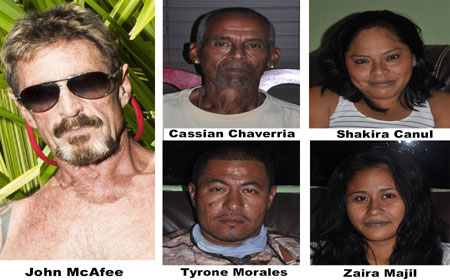 BELIZE CITY, Thurs. Sept. 22, 2016–The United States entertainment network Showtime, a subsidiary of the CBS television network, has been advertising the release date of Gringo, a documentary about John McAfee, the US anti-virus maker whose time in Belize ended abruptly with his sudden flight in the wake of the murder of his neighbor, Gregory Faull.

Faull, an American contractor who resided on northern Ambergris Caye, was found shot to death inside his house on November 11, 2012.

McAfee eluded Belize police who wanted to question him about Faull’s death, and crossed the border into Guatemala, where he was arrested and held briefly before he was allowed to proceed to the US.

Showtime has followed closely in the path of another US network, NBC Dateline, which visited Belize last fall in search of the story about Gregory Faull’s unsolved murder, on which it based a mini-series, which was hosted by its foreign correspondent, Richard Engle.

In the US, the McAfee story may still attract huge viewing audiences, depending on the spin and who is telling the story, but in Belize it hardly matters; John McAfee is long-gone, forgotten by most people, and the police seemingly have no interest in him any longer.

Showtime, however, has allegedly been doling out large amounts of cash to some individuals in Belize to get a piece of the McAfee story for its documentary.

Four Belizeans — two men who were once employed by McAfee and two women who told local media this afternoon that they were sexually intimate with McAfee — met for an unusual press conference at their attorney’s office this afternoon.

The four are alleging that they were exploited by Showtime to provide untrue information about McAfee’s time in Belize. They are also alleging that they were made to sign papers that they did not or could not properly read and comprehend, and they were paid handsomely to fabricate stories about McAfee, who owned and operated a large ranch at the entrance of Orange Walk Town. McAfee abandoned his Orange Walk property in May 2012, after it was raided by the police’s Gang Suppression Unit and he went to live on San Pedro, where he had a restaurant and other business interests.

Attorney Bryan Neal has written to the Showtime producers requesting that the footage of the four Belizeans be excluded from the premier of Gringo, which airs this coming Saturday night, September 24.

Neal told the press conference this afternoon that if footage featuring his four clients is broadcast, he would be retaining attorneys in the US to bring a claim against Showtime on behalf of his clients, who were duped into saying bad things about John McAfee for the documentary.

The first out of the four to speak was Tyrone Morales, 27, a tour guide from Orange Walk.

Morales explained that he met Nanette Burstein, who had told him over the phone that she wanted to do an interview with him about John McAfee.

Burstein is an award-winning documentary filmmaker.

Morales said he doesn’t know how Burstein had found him, but one evening he went home from work and she was at his village, telling him that she would pay for an interview about McAfee.

“I told her that I did not want to do the interview, but she kept sending me text messages. I do not know how she got my phone number,” Morales said.

“I also got a monetary advance from her. At the moment I got about $200; later on we said that we were going to meet up at the club. She was not there. So I started drinking. After the interview she gave me $5,000 Belize currency and she made me sign a paper. I tried to read the paper but the words were too small. After I finished speaking to them at the restaurant, I actually threw up, I felt so bad,” Morales disclosed.

Cassian Chaverria, 64, spoke next. He said that he was informed by someone on San Pedro that there was a Showtime crew out there.

“The person told me that Showtime was doing interviews with former workers of John McAfee, and if I would like to participate. I told him yes,” Chaverria said.

Eventually, he was contacted by the Showtime people, who were doing the interviews, and he asked them what they were offering, and they asked him what it was he wanted. Chaverria said he told them he wanted $30,000 Belize.

He was speaking to Burstein, who told him that she did not have authority to pay that kind of money out, and that she would have to get permission from her superiors.

After about three hours, she returned and offered him BZ$10,000, and asked him if he knew anything about Faull’s murder.

“I told her that I know what I heard on the news, even though I was about 500 yards from the building,” Chaverria explained.

During the interview, Chaverria said that “she kept asking about the murder and what John had to do with it.”

Chaverria recalled that he told the interviewer that he saw 7 or 8 dogs that were poisoned. He said that he had agreed to be interviewed for half an hour, and when he saw the time had passed, he wanted to end the interview, but she offered him $2,500 more.

He said that she handed him some papers to sign, but he did not read the papers; he just wanted to sign them and hold the money and have them gone from his room.

“Certain things I said were outright lies, but I tied it in with certain truths,” Chaverria said.

Orange Walk resident Zaira Majil, 21, who admitted that she had an intimate relationship with John McAfee, spoke next.

Majil said that she was followed by someone in a car who told her that they wanted to do an interview with her about John McAfee.

“John McAfee is not a person like that. He would not do something like that. Then, she asked me again, and I told her the same thing again. She was trying to make me say things about John McAfee. When the interview finished, she paid me $800 US in ten dollars bills,” Majil said.

“I don’t know when she went back to the US, but after she left, she was bothering me on Whatsapp and asking me if anybody else came and interviewed me. I told her to leave me alone. I did what I had to do with her and it’s over,” Majil recalled.

When she was asked how she got to know McAfee, Majil said she got to know him through her friend Shakira Canul, with whom she used to visit McAfee at his place in Orange Walk.
Majil said that when McAfee left for the US, she never heard from him again.

“So I was disappointed when I learned that it was not for John McAfee,” Majil disclosed.

When asked if she had signed the release, she said that Nanette made her sign the papers in a rush, saying that she had to go and interview someone else.

Shakira Canul, 33, was also present at the press conference, but did not speak.

Neal said that if Showtime went ahead and published the documentary, there would be consequences. Neal also said that he was not retained by John McAfee, whom he has never met and whom he does not know.

Chaverria said that he thinks that by lying about John McAfee, he betrayed him, because he was one of the best employers he has had.

“Betrayal because of the lies that I told to earn the money,” Chaverria said.

It stated, “I was forwarded your note requesting comment regarding Bryan Neal’s press release. Below is our Showtime statement:

“Showtime Documentary Films does not pay subjects for their interviews. We fully support Gringo’s filmmaker Nanette Burstein, and applaud the bravery of those interviewed in the film.”

Bryan Neal indicated to Amandala tonight that he is in possession of a Western Union receipt for money that Showtime allegedly sent to a 5th person, who has now come forward.