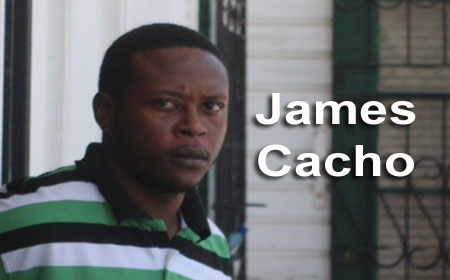 BELIZE CITY, Wed. July 22, 2015–A Belize City man who was remanded to prison last week on firearm and ammunition charges will have to spend a longer time than the mandatory three months for those alleged offenses, because he was brought back to court this afternoon on more serious charges.

James Lyson Cacho, 31, appeared before Magistrate Ladonna John, who arraigned him on charges of murder, attempted murder, dangerous harm and use of deadly means of harm.

Unlike the firearm and ammunition charges to which Cacho pleaded not guilty, these new charges that Cacho faces are indictable offenses, and so no plea was required of him.

Cacho joins Tarique Gillett, 18, whom police have charged with the same offenses for the March 1 murder of Michael Welch, and the attempted murder of Kingsley Morrison, 24.

Magistrate John remanded him to prison until his next court date, August 31.

Around 11:00 p.m. on March 1, Kingsley Morrison and his cousin Michael Welch were socializing in front of Morrison’s house on Periwinkle Street. The two were seated on the pan of a pickup truck, when two gunmen approached them and fired several shots in their direction.

Welch was hit multiple times and died about half an hour after the attack.

Morrison managed to escape with his life by running away, but he was shot in his right shoulder.

Four days after the shooting, police charged Gillett with Welch’s murder and the attempted murder of Morrison.