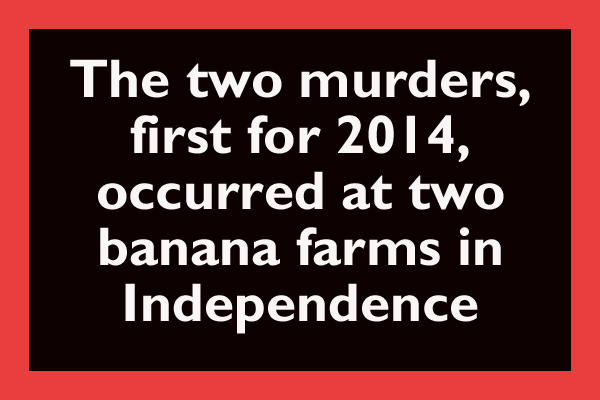 The New Year has just begun, and already, two persons have been murdered over the weekend in the Independence area, in the Stann Creek District, in two separate chopping incidents.

Jealousy may have been the motive for the vicious chopping that caused the death of a woman of Benque Viejo, known as Ufareila, 41, who was found in a hacked-up state at the Green Gold Banana Farm 16, in the Independence area, while Rene Arturo Perez, 25, a Guatemalan laborer of Finca San Jose Carrizal Gualan, Guatemala, was chopped up during a drinking spree in the Trio Village area.

Ufareila’s right little finger had been severed and she had two cut wounds on her upper left shoulder. The body was taken to the Southern Regional Hospital in Dangriga, where it awaits a post-mortem to certify the cause of her death.

Information to Amandala is that Ufareila usually went to the Green Gold Village area, from Benque, to visit friends and colleagues, and had gone to the village yesterday, Sunday. She was seen walking in the village about 4:00 in the evening between Green Gold Farm and Sagitun Banana Farm.

However, sometime around 10:00 last night, several people at a shop in Green Gold Banana Farm 16 heard a woman screaming. They then reported the matter to a businesswoman of the farm who went to find out what was happening. She found the woman, Ufareila, on the ground dead.

Police went to the scene and took the body to the Southern Regional Hospital, where it was pronounced dead on arrival.

Amandala was told that Ufareila was living with her husband in Benque, but had another admirer in the Green Gold Banana Farm 16 area. Police announced that they have detained a man who they believe can help in the investigation of the murdered Benque woman.

The other murder – of 25-year-old Rene Arturo Perez – occurred sometime before 8:30 Friday morning, January 3, 2014. Perez was found dead at that time, with multiple chop wounds to the body, at the Felix Paz Guevara Banana Farm located five miles east of the Trio Village junction with the Southern Highway, in the Independence area. He had been chopped on the upper and lower right side of the neck, on the right shoulder blade, the right hand and the left side of the neck.

Perez was declared dead on the scene, after which he was also taken to the Southern Regional Hospital, where he was declared dead on arrival. Police said that they are seeking a man named Donaldo, who is also known as “Tatero,” a resident of the farm, who they believe can assist them in their investigation into the murder of Rene Perez.

According to police, their investigation revealed that at about 8: 00 Thursday evening, January 2, Perez and Tatero were drinking on the farm in Tatero’s room, after which they both left the area.

On Friday morning at about 7:00, Felix Paz, the farm’s owner, was going to his farm when he saw the body of his worker, Rene Arturo Perez, with multiple chop wounds, and called the police.

So far, Tatero has not been found.

The two murders are the first reported deaths for the New Year, and they are being investigated by ASP Alton Alvarez, Officer Commanding Independence Police Formation.