Marie Sharp, 35-year veteran, to be inducted into Hot Sauce Hall of Fame 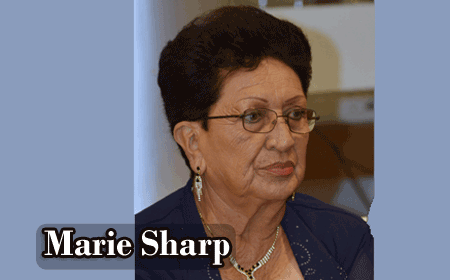 BELIZE CITY, Fri. Apr. 1, 2016–Belizean entrepreneur, Marie Sharp, 76, who started her business in her kitchen, will be inducted into the Hot Sauce Hall of Fame later this month when she travels to New York to receive her special red jacket and ring. Sharp will not just be the only Belizean to snag this lifetime award, she will be the only woman in the group of honorees.

“It’s the highest honor that I think anybody can ever achieve… not only for me. When they notified me, they congratulated me and my country and the people of Belize for being elected, Sharp told Amandala.

She said that when she received news of the award, she was “very, very happy” and “surprised.” She still does not know how she was selected for this special honor, but she plans on being in New York for the April 23 induction.

It explained that the winners were picked after months of balloting with almost 500 voters.

“This year’s group are the biggest and brightest names in the industry: One of Legend. One of inspiration,” it added.

Sharp is humbled by the reward for her hard work and dedication spanning over three decades.

“It is a great honor really for them to choose somebody outside the US. I felt really good about that and I felt here I am being given a chance to get something out of many years of working, 35 years in industry,” she told us.

Today she leads a world-famous hot sauce production company which exports not just to the prime markets for Belizean products – the US and the UK, but also to places like Australia, Shanghai, Korea, Lebanon, Kuwait, Germany, Switzerland, Holland, Mexico, Canada, Guatemala, Salvador, Honduras, Costa Rica and Taiwan. She is now pursuing buyers in France and Italy.

She said that when she was notified of the nomination, she did not really give much thought to it.

“Everybody else was American and I was Belizean. I said I did not stand a chance because I am an outsider,” she told us.

Last week, she received the great news that she was chosen to be enlisted into the Hot Sauce Hall of Fame. She will be among the inductees who will be called onstage, to share about her achievements. Then, she will be presented with the signature ring and jacket and then be hosted for photoshoots and interviews.

Marie Sharp will also feature her products at an expo which will be held by organizers. Currently, she produces 6 carrot based peppers, 2 citrus based peppers: an orange based pepper and a grapefruit based pepper. She also makes a hot sauce from prickly pear and two smoked habanero varieties. She also produces steak sauce, and jams and jellies made from Belizean fruits and unrefined sugar from cane grown in Belize.

Sharp said that currently, she exports about 50 containers a year and each container carries 4,000 cases of her products. She has been exporting since 1986, when she began with small quantities to the US through friends in the Belizean diaspora. Marie Sharp has since crossed the continent.

The Hot Sauce Hall of Fame Foundation notes that Marie Sharp, who started making sauce in the early 80’s, was the creator of Melinda’s sauces.