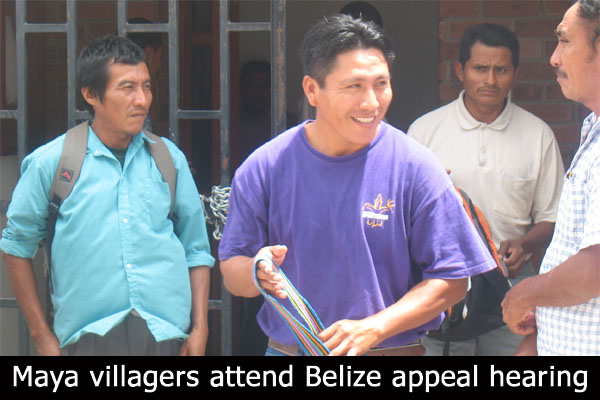 Even as the Government and the Maya communities of Toledo are disputing over petroleum works being undertaken by US Capital in southern Belize, the Caribbean Court of Justice, the country’s highest appellate court, has listed for hearing the appeal of the Maya Leaders Alliance and The Toledo Alcaldes Association, as well as 23 Maya villages of Toledo in a claim against the Attorney General of Belize.

The Maya have insisted that the Government should respect their rights as indigenous landowners, and put in place systems which recognize their customary land tenure, including the demarcation of ancestral lands, and mechanisms for dialogue which will bring them into the decision-making process before the issuance of logging and petroleum concessions, and other agreements which could infringe or impact on their rights.

Meanwhile, the Government is being challenged over its decision to permit hydro-development inside the Bladen Nature Reserve, which has paramount protective status.

Christina Garcia, Ya’axche’s executive director, told Amandala that although the company in question is no longer operating in the south, they are appealing the court ruling because they find it “worrisome” that any activity can be permitted in protected areas – even inside Bladen Nature Reserve – if the Chief Forest Officer, who is the park administrator, grants consent.

Garcia said that based on the court ruling, it is evident that the administrator in charge of the protected areas can rule any day that oil drilling or anything can happen in these protected areas, and they are still challenging that view.

Ya’axche is being represented in court by attorney Magali Marin, who Garcia said is preparing the case and also getting a team of lawyers ready to argue the appeal, because the matter must be resolved in court.

No date has yet been announced for any of the proceedings.

The CCJ also lists as pending two cases surrounding the nationalization of Belize Telemedia Limited, in which the Government of Belize’s actions are being challenged before the country’s final appellate court.