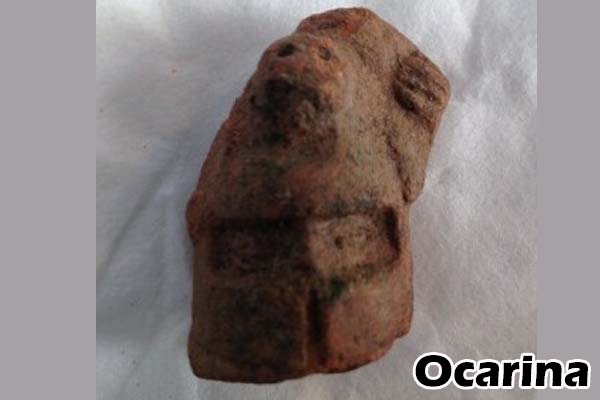 The United States Federal Bureau of Investigation (FBI) has returned a Mayan artifact stolen from Lubaantun to Belize. The Government of Belize announced on Tuesday that H.E. Nestor Mendez, Ambassador of Belize to the United States of America, received the artifact in Washington, D.C. on Monday, November 25, 2013.

“The FBI agents informed that the item was taken by a student who visited the site on a field trip. After learning that a student had possession of the artifact, University [New Hampshire University] authorities contacted the FBI,” the Government of Belize said in a statement.

“At the handing over, Ambassador Mendez thanked the University for its swift action and the FBI for repatriating the [ocarina],” the statement added.

Dr. Jaime Awe, Director of the Institute of Archaeology in Belize, said that a group of students from New Hampshire University’s education program – where he was once a professor – visited Belize about six months ago. A female undergraduate student in the group found the ocarina and took it to the US.

The ocarina is a ceramic whistle with a human effigy, about 6 inches long. It is made from clay.

According to Awe, “Lubaantun exported these objects to other sites during the very Late Classic period (A.D. 800-900).”

Awe said that on the black market, the item could have fetched a few hundred US dollars.

A New Hampshire professor subsequently found out about it and took the object from the student and reported it to the FBI. He also contacted Awe to inform him they had the object, which they had to pass over to the FBI.

The new bilateral agreement signed about a year ago with the US State Department makes it illegal to take artifacts to the US, just as it is illegal according to Belize law to export objects from Belize, Awe said. He told us that the student broke the law in both countries, and the university took immediate action by expelling the student.

The university has a longstanding relationship with Belize and was really concerned that this could derail the program.

Awe said that, “the repatriation of this object truly reflects the wonderful result of having signed this bilateral agreement with the US. Prior to that it was not illegal to import antiquities from Belize to the US.”

He said that Belize retains the option to pursue criminal sanctions against the student, but the US has first jurisdiction, since she was found with the object there.

Awe emphasized that it is illegal for anyone to excavate without permission, or to buy and sell antiquities.

In Belize, the penalty for illegal importation and exportation ranges from BZ$5,000 – BZ$10,000 – the same level of penalty for the willful destruction of an ancient site like the Noh Mul site.

“We are actually in the process of amending our legislation,” said Awe, adding that the penalty for the destruction of a site needs to be increased.

He notes, though, that in the event that someone in Belize finds an artifact or is in possession of an artifact, they are advised to call and inform ICA (Institute of Creative Arts), which will document the item and which would issue a permit to the Belizean holder to keep and display the item at home. There is, though, a prohibition against exporting the item.

“We won’t confiscate it or/and take you to court…” said Awe. “We will allow you to keep it in your possession.”

He said that while an item cannot be willed to descendants, the holder of the artifact can write a letter explaining the circumstances and requesting that the object or objects stay in the family. He said that there are such instances where people find artifacts on their farms and ask to keep them.