MCC Grounds should be ready for year’s end: NSC 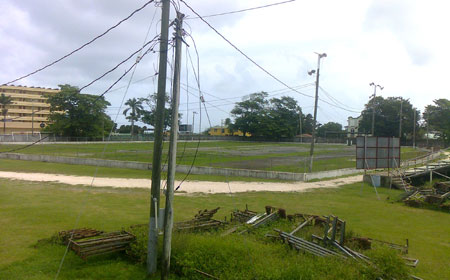 BELIZE CITY–The MCC Grounds, which over the years has been the primary sporting venue for Belize City residents, football fans in particular, has been closed since this past June pending renovation works that were initially scheduled to be complete by the beginning of last month.

Those upgrades are scheduled to include the surveying and leveling of the field, in addition to the planting of seeds for high quality grass. But while we understand that the works on the field have not yet concluded because the grass has not yet fully grown, National Sports Director, Patrick Henry, informed the media today that the proposed improvements to the football field and its general amenities are expected to be finished by this December.

He said, “[Presently], the grass is growing, but it takes a process and we must say that the rain came along at the correct time, and as a result, it is growing at a faster pace. While the grass is growing, we are working on the towers; there will be four towers and each tower will be 47.5 feet high. Those towers will replace the existing lampposts, and on each tower there will be 15 lights, 3 sets of five, so at the end there will be a total of 60 lights. Currently, we have about 20 lights here at the MCC grounds on these posts, so the lights, the brightness of the lights, will be by far greater than what we currently have.”

According to Henry, the towers are being assembled in Spanish Lookout, and will be brought to Belize City once they are finished, while the piles they will stand on are being built by Maheia’s United Concrete Supplies.

He mentioned that they will also remove the electric wires which are hanging loosely around the field, and that with a little more work and patience, the end result will be an improvement over the original.

“From there, and we say by December, the field will be ready. Just bear patience with us; we are working to the best [of] our ability, but we have to work along with the contractors and those that are doing the actual work. By the time the field is ready, you will have something reasonably good to play on. I say reasonable good because while they are playing, there will be other works that will be taking place over that time so as to make sure that the field [and] the environment is actually suitable and conducive for football,” Henry said.

“We will be changing the fence, [and] we will be putting in another bleacher or two, but that would be going along while they would be able to use the field. We also want to renovate the inside of the building so that the teams could have a home-and-away kind of dugout/changing room situation”, Henry explained.

The cost to upgrade the sporting facility, which currently hosts Belize City teams from the Premier League of Belize (PLB) football tournament, as well as other amateur and senior league football competitions, is estimated to be in the vicinity of $150,000.