Mechanic gets bail for abetment to carrying a firearm 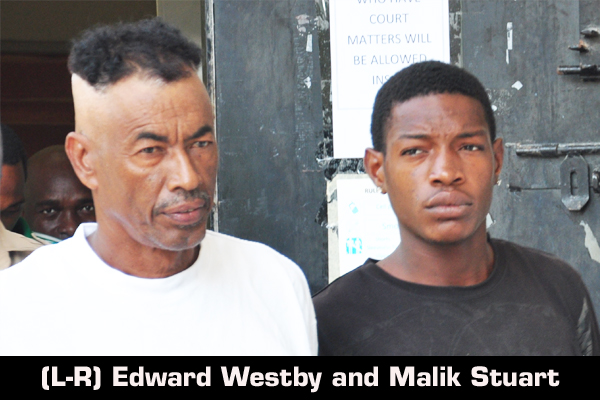 Following a fatal shooting in the Jane Usher Boulevard this morning, police were on patrol in the area and chased a young man who they are alleging, handed a firearm to a mechanic. Police arrested and charged both men; in the process, they learned that the mechanic was the licensed owner of the gun in question.

Edward Westby, 53, a mechanic of 49 Fabers Road, appeared before Chief Magistrate Ann Marie Smith with his attorney, Senior Counsel Simeon Sampson, to answer to a charge of “abetment to carry a firearm.”

Police are alleging that Westby facilitated Malik Stuart in carrying his licensed firearm.

Stuart, 19, a resident of Antelope Street, was unrepresented and appeared along with Westby to be arraigned on separate charges.

Both men pleaded not guilty to the charges, but while Westby was released on a $1,000 bail plus one surety in the same amount, Stuart had no such luck. He was remanded to prison until their next court date on June 18.

In granting bail to Westby, the Chief Magistrate stipulated that $500 must be paid in cash and the other $500 would have to be signed for.

She also ordered that Westby, who told the court that his passport has expired, should not apply for any new travel document without the permission of the court.

His bail condition also stipulates that he report to the Queen Street Police Station every Thursday between the hours of 7:00 a.m. and 7:00 p.m.

Court records, however, indicated that Westby owed the court $200 for unpaid traffic offences. He was ordered to pay his outstanding court fine before he could access the bail offered to him.

According to a police source, police chased Stuart in the Fabers Road area this morning and an officer is claiming that he saw when Stuart handed the gun to Westby, who holstered it.

When police approached him, Westby told them that the gun is licensed to him.