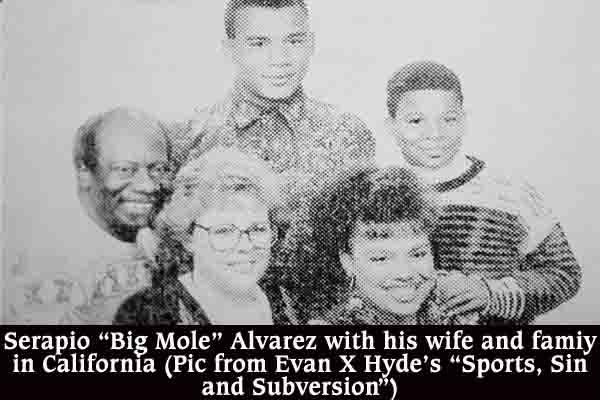 The news a few weeks ago of the passing of another football legend, Serapio “Big Mole” Alvarez, in California, USA, (on Friday night, August 23), underscores the importance of getting our football records and highlights documented in an accessible fashion for new generations of sports fans. For example, their names might mean little to today’s semipro ballers, but Big Mole and the Mugger, who also passed just over two months ago on June 28, were both instrumental in the first volleys launched in the battle to enact professional football in Belize. What these brothers did in the mid-1960’s with their Independence football team was indeed revolutionary at the time, and their effort later became the inspiration for new generations of footballers to achieve and realize the dream of professional football, for which they had fought and suffered ostracism from the entrenched football bureaucracy.

“Power gives up nothing without a demand,” and just like the Mugger, Big Mole and the players of Independence were banned from playing football for months when they first crossed hairs with the football “committee,” so it was with the Milpros Football Club in 1989, who were also banned for a while from participating in football.

I was too young to know or understand what all was going on in football when Independence was reportedly sanctioned by the football committee in the mid-1960’s, (I don’t know the exact year) but it is the writings of Evan X Hyde in Amandala in later years, when I was playing and coaching football, that nurtured the seed of inspiration, with the revelation about the revolutionary stand that the Mugger and Big Mole had taken. For that, these men have always been an inspiration and source of motivation for myself in my own football journey. At the time of their agitation and demands, there was no Amandala or Krem to voice and champion their struggles; in fact, UBAD had not yet come on the scene, so these brothers (Big Mole was an original UBAD member, according to the X) were football revolutionaries in their own right.

I still have not been able to get the full details of that episode in the 1960’s when Independence was punished by the football establishment; and the two men who would most know the details are now gone, the Mugger and Big Mole.

Two images are burned in my mind regarding Big Mole. The first, his defining statement of war and intimidation before a game, when entering a muddy MCC after hard rains, as he jumped and rolled in the mud holes, white uniform and all, to let the world and especially his opponents know, that he and the Independence squad had come to do battle. Independence was a “roots” team, but where football was concerned they always appeared impeccably attired, with great pride, for their game. It was said that the Mugger would severely chastise any team member who arrived at the stadium for a game without his boots well “polished” and uniform “lily” white. All the more significance of Big Mole’s “war readiness” pre-game ritual, as he was always one of the “cleanest” in appearance coming into the stadium.

The second was recorded in the X’s “The Crowd Called UBAD,” where, in the stillness and suspense of the deathly quiet night of July 7, 1970, shortly after 7:00 p.m. outside the Supreme Court building, where hundreds inside and outside the court house awaited the verdict from the chairman of the jury in the “Seditious Conspiracy” trial of Evan X Hyde and Ismail Omar Shabbaz of UBAD; there was suddenly a shout from a distance outside in the crowd, shattering the eerie and tension filled silence of the night, like a voice crying out in the wilderness, “LET MY PEOPLE GO!!” That was, according to the X, the voice of Serapio Alvarez, a.k.a. Big Mole. The verdict was “Not Guilty.”

Belize, our beautiful Belize, did not offer a hopeful future for a successful family life to Big Mole, the Mugger, and many others who eventually joined the exodus north, where there was greater hope for meaningful employment. Both men got married and raised stable families in the U.S. where they resided until their passing in 2013. The Mugger married a Belizean born Creole woman and lived in New York, while Big Mole married a white American woman and lived in California; and both were reportedly good husbands and fathers.

In little Belize of the 1960’s, Big Mole was almost a social outcast, someone from the “ghetto;” and he quickly became one of the earliest UBADers. To some it would seem ironic that Big Mole would marry and raise a family with a white woman in the States; but they would be forgetting that UBAD always preached against white racism and “downpression” of black people (the black, the brown, the yellow and the red), but never against white people per se, as there were individual white people who worked with UBAD from its earliest days with the breakfast program. As black Belizeans and UBADers forever, therefore, we all shouldn’t be reluctant to embrace as our own the wife and family of Big Mole. She chose to join her seed with that of our Belizean warrior; therefore, she must be a revolutionary also in her own right, to have made that choice and remained at Big Mole’s side through thick and thin.

Big Mole reportedly passed away in the U.S. on Friday night after a long illness. His memory, along with the Mugger, will always be a source of inspiration for me.