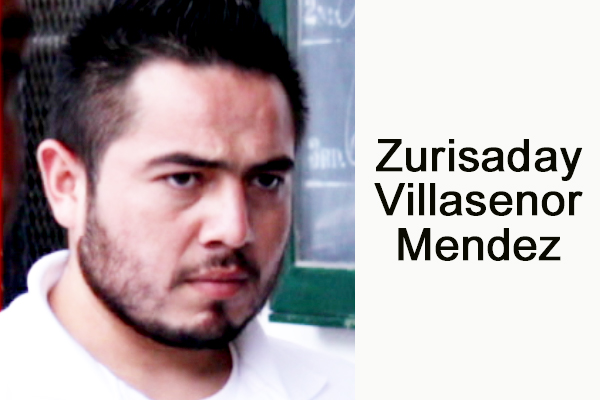 After posting $75,000 cash bail for firearms and drug offenses, Zurisaday Villasenor Mendez, 22, did not appear for his court hearing

After spending 15 months in the Belize Central Prison, since Corozal Police charged him in November 2012 with firearm and drug offenses, Mexican national Zurisaday Villasenor Mendez, 22, secured a $75,000 cash bail from the Supreme Court on February 10, and appears to have fled the jurisdiction of Belize’s Magistracy since then.

Mendez’s case was called up on Tuesday at the Belize City Magistrate’s Court, to which it had been transferred from the Corozal Magistrate’s Court due to security concerns. But neither Mendez nor any of his three attorneys showed up at court.

The conditions that Supreme Court Justice John Gonzalez had imposed on Mendez’s bail was that he was to surrender all his travel documents; he was supposed to report to the Corozal Police Station, and he was to appear at all adjournments of his case. Mendez, however, had reportedly failed to report to the police station.

When the court orderly called Mendez’s name this morning, no one answered. Returning into the courtroom and announcing the “no appearance,” the Corozal Magistrate Narda Morgan, who is presiding over the case, remarked: “That was expected.”

Director of Public Prosecutions Cheryl-Lynn Vidal, who is prosecuting the case and who had vehemently objected to the granting of bail to Mendez, submitting that he is a flight risk, expressed that the attorneys were disrespecting the court by their non-appearance.

Vidal contacted Arthur Saldivar – one of Mendez’s attorneys, who was at court in Belmopan, and who conveyed that he had spoken to another of his client’s attorneys, Ellis Arnold, who assured him that their client would be at court. After telephone conversations between Saldivar and Vidal, the court learned that Mendez was in Corozal at that point.

So, minutes after the hearing had convened in the #6 Magistrate’s courtroom, Magistrate Morgan ordered that Mendez’s $75,000 bail be forfeited. And she promptly issued a bench warrant for his apprehension, before adjourning the case sine die (indefinitely).

Prior to obtaining bail, Mendez’s attorneys had filed a motion at the Supreme Court, contending that their client’s constitutional rights were being violated, because of the prolonged time he had been on remand. That case has not yet been called up by the court.

On November 1, 2012, Corozal Police busted Mendez at the Las Vegas Hotel, near the Santa Elena border. A search of room #103, where police apprehended him, led to the discovery of an incredible stash of weapons, communications devices, cocaine and marijuana, leading cops to believe that he is connected to the drug underworld at best, or was on a mission to carry out some nefarious deed. Police believed that they could connect Mendez to the stash of weapons and drugs, so he was charged.

Inside room #102, police found an assortment of food supplies, clothing, alcoholic beverages, documents and luggage. The keys for several vehicles were also found inside the rooms. The vehicles to which the keys gave access included a Mazda car, a Chevrolet double cab pick-up, a red Ford 250 pick-up, with no license plates, and a double cab Ford pickup with a license plate. All of the vehicles were parked on the hotel’s compound.

Inside one of the parked vehicles, more arms and ammunition were discovered — a pair of black and brown Ak-47 rifles which were loaded with 30 and 26 rounds of 7.62 mm ammunition, respectively.

Behind the passenger seat inside the vehicle where the AK-47’s were found, police also found a black G-Cherokee brand .9mm pistol with 16 rounds; a black 9mm magazine, with 16 rounds; another magazine with 10 rounds; 2 empty magazines and a Colt Super .38 pistol.

He had pleaded not guilty to all the charges.