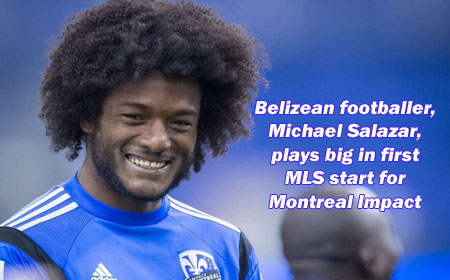 MONTREAL, July 3, 2016–Michael Salazar got to live out his dream in his first MLS start for the Montreal Impact.

Drawn into the lineup with superstar striker Didier Drogba sidelined by a leg injury, Salazar scored his first two goals in six league games for Montreal, which overcame a two-goal deficit for Saturday’s 3-2 victory against the New England Revolution at Stade Saputo.

“Yeah, no pressure,” said Impact coach Mauro Biello. “He knows it’s about understanding your defensive responsibilities and expressing yourself offensively, play simple and get in the box. He scores in practice and I’m glad he was able to score tonight.”

Salazar, selected in the second round of the 2016 MLS SuperDraft (No. 24 overall), scored his first goal 40 minutes in, cutting New England’s lead to one after Revolution striker Kei Kamara’s brace left the Impact trailing 2-0 in the 33rd minute.

“As a little kid this is always what I dreamed of, moments like these,” Salazar said. “But the most important thing is to help the team win, and we got the win today.”

“In training every single day, balls [are] getting served into the box, [I’m] chesting things down, [It’s] just “Be strong,” because I’m a big guy,” Salazar said. “So I just try to be strong in there every single time and this is what I do every time in training and it paid off today.”

Ignacio Piatti made the comeback complete when he scored his Impact-leading 10th goal on a penalty kick to make it 3-2 in the 54th minute.

“We’ve shown all year we never give up,” Biello said. “We fight to the end. We’ve done that numerous times this year. I’m proud of that.”

Replaced by Johan Venegas in the 85th, Salazar was given a standing ovation by the Stade Saputo crowd of 20,279 as he walked off the field.

“These fans are amazing,” Salazar said. “They’re behind us every single game when we’re playing at home, so for them to give me a standing ovation in my first start, it’s a dream.”

(Ed. Note: A grandson of Avengers football legend Theo Lennen, Michael Salazar was born in New York, grew up in San Ignacio, Cayo, and attended college in the U.S. before making his international debut for Belize on June 11, 2013, in a 0-0 draw against Guatemala, and was later named to our 2013 CONCACAF Gold Cup roster.

According to Wikipedia, “Salazar was selected in the second round (24th overall) of the 2016 MLS SuperDraft by Montreal Impact. He attracted favorable attention when he scored a goal for the Impact during a pre-season friendly match against D.C. United. He signed his first MLS contract days later.”

Big Up, Michael! The Jewel is feeling proud!)