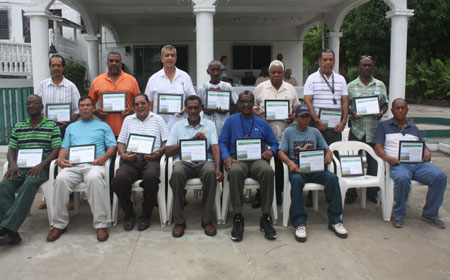 BELIZE CITY, Thurs. July 9, 2015–Henry’s Eden Resort on the Benque Viejo Road was the venue once again this past Sunday, July 5, for the second award ceremony – Lifetime Membership – to honor past players and, supporters of the legendary Mighty Avengers Football Club (1968-1979).

Belize’s football history is a work in progress, but whenever there is consideration about the most memorable, outstanding and awe-inspiring team to grace the football field in the Jewel, there are a few names that always stand out, names that have become legendary and almost mythical among surviving lovers of football from yesteryear. Today’s youngsters cannot be blamed for their ignorance; they have not sufficiently been informed and enlightened about the great teams of the past, names like Queens Park Rangers, Dunlop and the Mighty Avengers.

The Mighty Avengers is extra special, because it represents a period of consistent excellence that can hardly be matched in Belizean football lore. This is because the Avengers dynasty did not start small, like most clubs do; nor was it the product of a wealthy owner who could easily attract the best talent in the country; neither did it burst with exceeding brilliance upon the football scene, only to mysteriously crumble and disappear as suddenly as it had arrived. In fact, the team that was to one day become Avengers, was being formed, and molded and pounded into enduring quality and form by its stellar congratulation to the organizers of the event and the Mighty Avengers Football Club.

After those awardees present, and individuals delegated to represent the others, had received their award plaques and taken their seats in front of the modest gathering, Mr. Gerald Henry, Jr., fully attired in his official FIFA Referee uniform, performed the task of Tolling the Bell in memory and honor of recently departed members of the Mighty Avengers Football Club – Eric Fairweather, Salvador Habet, Sr., and Russell Waight.

Next was the Vote of Thanks by the tireless Mighty Avengers Secretary, David Cruz.

And, in keeping with their long standing tradition, the program concluded with the singing of the official Avengers Song, Heart of Jesus, by all members and guests present.