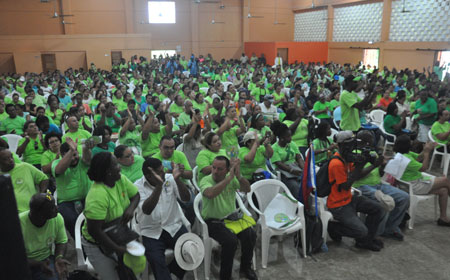 BELMOPAN, Mon. Sept. 19, 2016–The inclement weather hanging over the country did not deter the thousands of teachers who stayed out of their classrooms this morning, to send home the message of their discontent with the United Democratic Party government of Prime Minister Dean Barrow, which has failed to convince them to accept a deferral of the three percent salary adjustment that had previously been agreed upon between the BNTU leadership and the government.

The mood in Belmopan was made more somber by the weather and the presence of a large detachment of police, made up mostly of recruits from the police’s training school, that stood as a barrier between the protesters and the National Assembly building after the teachers held their rally inside the Belmopan Civic Center, which overflowed outside with hundreds of teachers under tents set up for the occasion, before they marched onto the steps of the National Assembly building, where the peaceful protest ended shortly after 1:00 p.m.

It was not only the salary adjustment, however, that the government has reneged upon that has caused alarm, said the union, but it is also the Dean Barrow administration’s handling of the number of pressing national issues that have caught the attention of many Belizeans.

The recent immigration scandal, government’s delay in signing on to the United Nations Convention Against Corruption and its objection to the selection of a Senate Select Committee that would be free from governmental interference, as well as its refusal to appoint the 13th Senator, were among major points presented by a panel that featured BNTU’s national president, Luke Palacio; Pastor Louis Wade, the host of the Rise and Shine morning show on Plus TV; and Evan “Mose” Hyde of KREM’s Wake Up Belize Morning Vibes show.

Teachers and public officers were scheduled to experience a salary increase of 3% last month. However, the government claimed that the damages brought on by Hurricane Earl compelled them to reallocate spending and as a result it proposed to defer payments until next April.

The BNTU is up in arms against that proposal, while their sister unions, the Public Service Union (PSU) and the Association of Public Service Senior Managers (APSSM), have accepted the government’s proposal.

Readers will recall that on the heels of the “Citizen” Won Hong Kim saga — which involved the issuance of a Belizean passport to a Korean national while he was in a Taiwanese prison, and without him ever having set foot in Belize — the Auditor General conducted an audit into the Passport, Immigration and Nationality Departments, which revealed massive corruption and irregularities, as over 55,000 immigration documents were issued with irregularities between 2011 and 2013, with 13 former and current UDP Cabinet ministers, as well as the House Speaker, being named in it.

The ruling Barrow government had recently defeated a motion by the Opposition’s Senators to have the findings of that audit investigated by a Special Senate Select Committee. However, Barrow and Cabinet later reversed that position because the Opposition brought it to their attention that the alternative type of committee they proposed — which would comprise appointees from both the House of Representatives and the Senate —would be illegal and would be successfully contested in court, and so, Barrow is in support of the Special Senate Select Committee, but is trying to influence its composition, which the BNTU and the Opposition have strongly opposed.

Since the amendment of the Constitution, however, the law only remained on the books, but was never brought into force because Prime Minister Barrow had refused to sign the necessary Statutory Instrument to bring it into force.

When the matter was challenged in the Supreme Court, the government won the case and it was never appealed.

PM Barrow, commenting on the 13th Senator, had famously said, “It ain’t going to happen!”

The Belmopan Civic Center, filled with teachers from schools nationwide, erupted after Palacio threatened to take the Government of Belize to court for “union busting” and went a step further to cite Deputy Prime Minister and Minister of Education, Hon. Patrick Faber, as being one of those union busters who met with various school managers and urged them to keep classrooms open today.

Some school management, apparently under the thumb of the Ministry of Education, were able to pressure some teachers not to attend today’s rally and protest.

In his address to the teachers, Pastor Wade dismissed them as being more loyal to the UDP than to the country.

Wade declared: “Some people are too heavily associated with corruption.”

Hyde, who defended the credibility of the BNTU with the recent Auditor General’s report as a basis, reasoned that, “There is a seven-hundred page document, and in that document we see a lot of Cabinet names and we see even the Speaker of the House of Representatives in those documents, but there is one name that you don’t see in that document, you don’t see Luke Palacio….”

The veteran trade unionist, George Fraser, who was the executive secretary of the Belize National Teacher’s Union, and who also served as the BNTU’s senior advisor, told Amandala, “Today’s protest is a continuation of our ‘Stand Up for Belize Protest.’ We are tired of all the corruption. The matter of the Auditor General’s Special Audit is the worst scandal to hit our country in a long time.”

“Mr. Neal, there are thousands of teachers here in their lime-green T-shirts with the slogan ‘teachers got yu back,’ but you are not a teacher, so why are you here this morning?” Amandala asked Neal.

“I am a product of teachers, and I am a Belizean. Teachers teach my son the way they taught me and I have to come out and support them. What they are standing up and saying is that there must be a change in direction. The government must account for public finances. How you cannot support that? I want to appeal to my professional colleagues, not because you are a lawyer or a big executive means you cannot come out and support people. You have to stand up for what is right and turn things around in this country,” Neal said.

He added, “I love the vibes, I would come out here and support every day, if I have to.”

“Teachers are the character-building background for our children,” said Annie Palacio, “They are in the classroom every day and they see the country going the way it is. If they don’t stand up, then they are hypocrites and they become a part of the problem, not the solution, so that is why I am out here supporting,” Palacio said.

“I have been a teacher for more than 20 years. I am an activist and a youth advocate, so with all of that under my umbrella, I just have to be out here to support the Teachers Union,” she said. 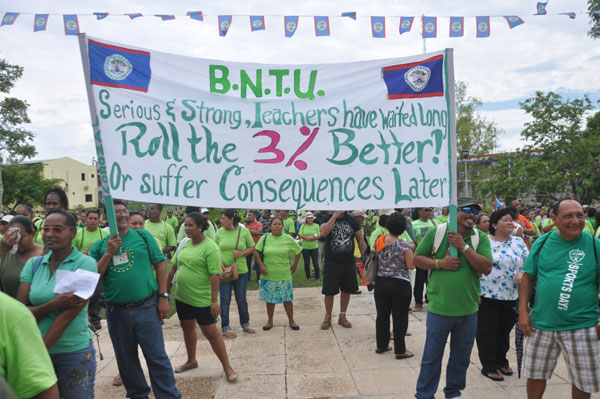 A former mayor of Punta Gorda Town, Carlos Galvez, who was dressed in a lime-green T-shirt resembling what the teachers wore, told Amandala, “I stand in solidarity with the teachers. I must say my mom, Ms. Florence Galvez, is still a teacher at 77 years old. She is still in the classroom teaching. I understand the challenges that the teachers are faced with, for their salary adjustment. Not only that, but there are a lot of national issues that other organizations are talking about.”

“All is not well in our country,” said the former Mayor of Belmopan, Anthony Chanona, “And what better time than the month of September to fix what is broken? It is a time of patriotism and a time to do what is right for Belize, and that’s why I am here to support the teachers.”

“I am here because I was a teacher and I don’t like to see where my country is going. I feel that if we don’t take a stand today, in the future we will all be sorry. We want the kind of country we had before. There were a few rotten politicians before, but now it seems that most of them are rotten. We want our country back,” Beverly Swasey, a former teacher who has been in the classroom for 36 years, told Amandala. Swasey said that she retired from Belmopan Comprehensive High School after 17 years in 2000.

A tour guide, Rudy Burgos, told Amandala, “I am out here today because I feel like an idiot. The people I have voted for, I think that I have voted for idiots, and when I think about that, I feel like an idiot. We blame our politicians, but collectively, we are Belmopan bandits. Unless we start doing the right things, morally and ethically, how can we make those demands from our elected representatives?”

The BNTU’s protest was bolstered by the support of the president of the Maya Leaders’ Association (MLA), Christina Coc, and the chairman of the Belize Sugar Cane Farmers Association (BSCFA) Orange Walk Branch, Alfredo Ortega.

The BNTU leadership is scheduled to meet on Thursday with Prime Minister Dean Barrow and other government officials to hold discussions on the salary adjustment and other national issues.

Teachers, however, are planning industrial action if there is no progress with the negotiations with government.