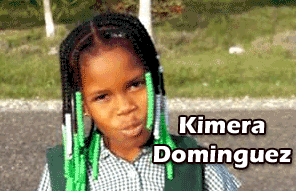 When they arrived, they found the motionless body of 8-year-old Kimera Dominguez, a standard 2 student at Biscayne Government School, on the banks of a manmade water hole.

Kimera had gone into her yard to greet her incoming brother and took unusually long to return inside the house with him. When she did not respond to her mother’s shouts, a search ensued, which led to the discovery of her body in the water hole.

Lunnet Dominguez, Kimera’s aunt, told Amandala today that she believes her niece experienced a sudden epilepsy attack and unfortunately, slid into the water hole, located in front of their residence. She further added that when Kimera was retrieved, she was stiff, with visible signs of foam at her mouth.

Those signs of foam and that stiffness, she said, “were also witnessed on Tuesday, April 19, 2016, at around 2 a.m. following Kimera’s first epilepsy attack.”

According to her aunt, after that first epileptic episode, Kimera had been taken to the Karl Heusner Memorial Hospital in Belize City, where she was given medication and the family was assured that her attack would not be repeated.

Kimera Dominguez was pronounced dead by Dr. Amy Magdaleno at the Karl Heusner Memorial Hospital on Thursday, April 21. A post-mortem examination revealed that she died as a result of “accidental drowning.”