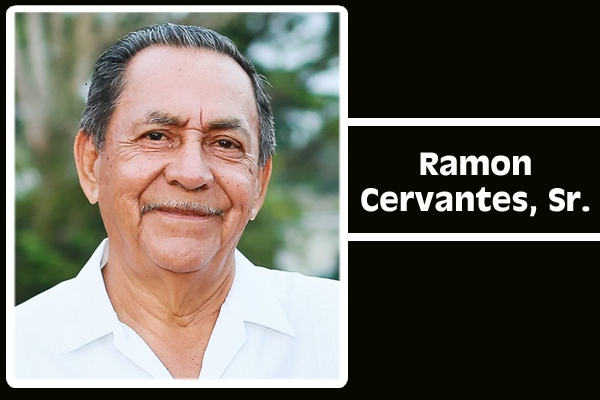 “We will leave no stone unturned …” – ACP Russell Blackett

Four days after Ramon Cervantes, Sr., 71, was reported missing, his family had their worst fears realized after his body was found Saturday night, partially decomposed, buried in a shallow grave near the Honey Camp Lagoon in the Orange Walk District.

Cervantes, affectionately known as “Don Ramon,” according to police reports, had been bludgeoned to death.

Last Tuesday afternoon, July 1, sometime between midday and 4:00 p.m., the well-known cañero disappeared from his cane field on the San Roman Road – also in Orange Walk – where he had apparently been spraying herbicide on some parts of the field, leaving behind tell-tale signs which caused his family to believe that he had been kidnapped in broad daylight.

Except for a few short and unusual conversations that he reportedly had by phone with his son, PUP Orange Walk North standard-bearer, Ramon Cervantes, Jr., Tuesday afternoon, Cervantes, Sr., had not been seen or heard from since – until around 9:00 p.m. this past Saturday, July 5, when Orange Walk police received an anonymous tip that led them to a deserted property off the San Estevan Road, where they made the heartbreaking discovery.

Amandala visited the scene early Sunday morning, and we waited for nearly four hours in the broiling heat as investigators slowly processed the area, while police pathologist, Dr. Mario Estradabran, conducted an onsite post-mortem on a corpse that was unearthed near the banks of the Honey Camp Lagoon.

While that process was taking place, Amandala spoke to the Head of the National Crimes Investigation Branch (CIB), Assistant Commissioner of Police Russell Blackett, who was at the scene with other senior high-level police personnel, and he gave us a synopsis of the circumstances under which Cervantes’ battered body was located.

He said, “A partially decomposed body was found just off the Honey Camp Road in a farmland area. The body has apparently been in a shallow grave for about three days, and it has been confirmed as that of Ramon Cervantes, Sr.”

Blackett could not readily say whether it was indeed a case of kidnapping, since they (police) do not have any evidence to prove that, but pointed out that although the investigation is “tedious,” police are determined to discover the truth about the murder.

“We will leave no stone unturned, and everybody involved will be sought after and dealt with according to the law”, he promised.

Although information to us was that Cervantes was found blindfolded, gagged, badly beaten, handcuffed and his head bashed in with a stick which was buried with him, Blackett did not elaborate on those assertions, maintaining that the matter is the subject of “intense” police investigations.

After the autopsy concluded, the body was put in a coffin and transported to the Orange Walk Cemetery, where Cervantes, Sr., was laid to rest following a brief internment.

By then, however, the news had spread like wildfire throughout the northern town, and this morning, Monday, throngs of angry Orange Walk residents congregated in the areas around the Orange Walk Police Station in the sweltering heat, waiting to vent their ire at the alleged culprits who, at the time, were expected to be taken to the Orange Walk Magistrate’s Court to be arraigned in connection with the heinous murder.

While the crowd – which numbered in the vicinity of 300 – unwaveringly stood outside chanting “Justicia para Don Ramon”, which means “justice for Don Ramon” in English, the Northern Regional Commander of the Belize Police Department, Senior Superintendent Joseph Myvette, held a press conference inside the station to present the information that police have gathered so far.

Myvette said, “Sometime around 9:00 p.m. last Saturday night, the body of Ramon Cervantes, Sr. was discovered in a shallow grave just behind a farm located five miles up the Honey Camp Road. After the post-mortem, the doctor concluded that he died from trauma shock as a consequence of head injuries due to a blunt instrument. Our investigation into this matter continues, and we have submitted the evidence gathered so far to the Director of Public Prosecutions (DPP) for her directive.”

Although Myvette was tightlipped about the circumstances surrounding the suspected kidnapping and the suspects who are currently in police custody (one of whom is believed to be a police officer) – citing that the investigation is still underway, he did mention that the time of Cervantes’ death was sometime around the evening of Wednesday, July 2, which is the day after he had vanished.

There were also rumors that the Cervantes’ family had been contacted by individuals who demanded a ransom for the murder victim; however, Myvette stated that he did not have any information of that sort, since that was “not a part of [their] investigation.”

The Northern Regional Commander also could not disclose the names of the “persons of interest,” and how soon they expect charges to be brought against the accused persons, emphasizing that that is totally dependent on the Office of the Director of Public Prosecutions.

While the crowd lingered to get a glance of the detained persons, whom they believed were being taken to court today (no one was charged), Myvette repeated that they were not in a position to decide if anyone would be charged, because they had to await the directive of the DPP.

In his earlier years, Ramon Cervantes, Sr. was also a former Mayor of Orange Walk, a former Senator and a former chairman of the Social Security Board.

Apart from his stature as a statesman, Don Ramon was also a revered sportsman who played the position of defender on Orange Walk’s Team UCA in the 1980s, after which he later became a football referee who, along with Chilean-born Juan Leighton (who now lives in Belize), was instrumental in training Belizean referees and getting Belize to join CONCACAF.

A memorial service was held in his honor at the La Inmaculada RC Church in Orange Walk Town today, Monday, at 3:00 p.m.