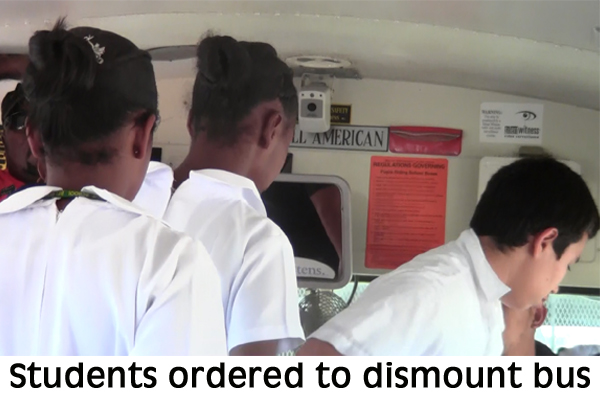 Complaints over an inadequate and sometimes overly hassling public transportation system—some of them lingering unresolved for years now—are getting the attention of Crispin Jeffries, Chief Transport Officer, who told Amandala this morning that he has been advised of a call to a morning TV talk show complaining of commuter problems.

Partly due to the absence of a proper ticketing system, many commuters have daily troubles trying to get a space on a bus. Our newspaper learned on Friday that a group of students were upset that they were removed from a bus in Belmopan and told to wait for the next available bus, but the same bus which ejected them, on the claim that they had no more space, packed on several more standees just a few blocks away, while Transport officers were not looking.

Under existing law, it is illegal for a bus to carry more passengers than its capacity, but Jeffries said that each passenger should by law also be allotted 15 inches of seat space. The refurbished school buses used to run commuters may say they can seat 80, for example – but that’s 80 children, not 80 adults, Jeffries explained.

At rush-hour, buses are generally in the habit of packing three passengers in two-seat slots, and four passengers in three-seat slots – just so that Transport inspectors, who check for overcrowding at terminals, do not see the standees on the bus. Then, they may fill the aisles with standees. Some commuters don’t mind, since their primary concern is getting to where they need to go, but transport authorities set limits to help ensure the safety of commuters.

There is still the problem of “passenger herding” at the Belmopan terminal, where anxious passengers pack themselves close to the exit, in order to bolt for a seat when buses arrive at their designated gate.

Whereas several years ago Belizean bus operators used a ticketing system—albeit with some deficiencies—none exists today.

In 2012, when we asked Jeffries about the reimplementation of the system, Jeffries said that the Government would move to implement one. Today, he told us that it is high on their agenda for 2014, but the legislation has not yet been drafted.

The Chief Transport Officer said that they continue to work on adding new runs to satisfy the demand by commuters and other passengers. Jeffries said that between 50-60,000 people commute across Belize each day, between villages and towns, and from district to district.

Jeffries said that the public transport system moves at least 4.5 million heads annually. The count is made at terminals, whenever a person moves from one point to another.

As always with technology upgrades, there is a cost factor. The new system would very likely mean an increase in operating costs for bus companies, which would, in turn, lead to an increase in bus fares.

Jeffries said that the main plan on their agenda for 2014 is implementing the national ticketing system, which would require that kiosks are set up inside terminals. Fares would likely be revised.

He said that roughly 5 of the 20 bus operators have already signaled their agreement. The proposal, he said, would also be discussed tomorrow when his department meets with officials from the various municipalities.

Jeffries said that the Department of Transport also does Breathalyzer tests, particularly when there is a complaint lodged by a passenger or member of the public. He said that three drivers had to be stopped from leaving terminals during the Christmas holidays, because the breathalyzers showed that they were about to drive while under the influence of alcohol. Both the person and the company were sanctioned, he said.

There are 54 possible Transport infractions, such as driving with the bus door open, and while some of them attract a fine as low as $25, drunk driving attracts a penalty of up to $500.

The DOT hotlines are 637-1070 and 637-1075. Jeffries said that the Department of Transport is working on getting a website up and running as well.