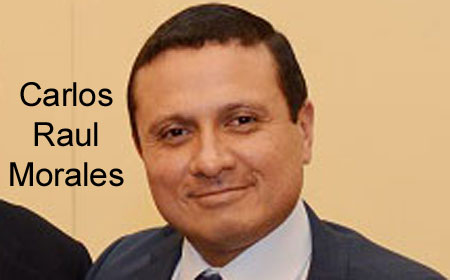 BELIZE CITY, Mon. Aug. 29, 2016–Guatemala’s Foreign Minister, Carlos Raúl Morales, has publicly accused Prime Minister Dean Barrow, and Belizeans in general, of being cynics, following a call from Barrow last week for a public apology from Guatemala, after the unveiling of an expert report detailing the circumstances of the April 20th shooting death of a Guatemalan minor inside the Chiquibul National Park.

In response to the shooting incident, Guatemala had mobilized its elite troops to the Belize border and waged a public relations offensive, accusing Belize’s military of a “cowardly act of aggression” and claiming that there were 10 such incidents since 1999; but likewise not detailing the circumstances of the shooting incidents.

The expert report, filed with the Organization of American States by Dr. James E. Hamby (of the USA) and Dr. Patricia Rosa Linda Trujillo Mariel (of Mexico), confirmed that the bullets which killed the minor did not come from the Belizean military’s weapon. It also documented that there were two bullet holes in trees at the location where the Belize enforcement patrol, and particularly rangers of the Friends for Conservation and Development, co-manager of the national park, said that they had come under fire from the Guatemalans, who, according to the patrol, came flashing lights intermittently and then opened fire at them.

Barrow told the media last Thursday that it is “…a little worrying as to how the Guatemalans will react now, because this is clear vindication for the BDF [Belize Defence Force] and [the investigation] exposed the falsity of the position taken by their President, taken by their Foreign Minister and taken by their officials. So I am hoping that they will be mature enough to accept that they were wrong; that the allegations that they made against the BDF were utterly unjustified, and that they owe Belize an apology.”

Belize Foreign Minister, Wilfred “Sedi” Elrington disagrees that an apology is needed. He told the media Friday that, “I really don’t think that we should get caught up with demanding apologies from anybody.” He may have expected the reaction of his Guatemalan counterpart, which suggests that no apology will be forthcoming.

In an interview with José Eduardo Valdizán on the program HORA 15 EU on Emisoras Unidas, a Guatemalan news source, Morales was asked for his comments on Barrow’s call for an apology. He said that it was “”irresponsible,” and added: “That’s how Belizeans are… they are cynics,” although he is incidentally married to a Belizean woman.

“These are hard blows which they give us. Of course it hurts,” Morales said.

Speaking with the press last week, Guatemalan president, Jimmy Morales said that the incident requires a “serious and well-supported investigation,” but declined comment on the report, saying it would be irresponsible for him to do so before having the official presentation from their Foreign Ministry.

The Guatemalan Foreign Minister is also peeved by statements made by Magdalena Talamás, special representative of the OAS Secretary-General on Belize-Guatemala affairs.

“We cannot help what happened and you have to turn the page,” Talamás said, as she called on the parties to begin a process of reconciliation and to focus on the work that lies ahead.

The Guatemalan Foreign Minister Morales took umbrage at her remarks, and characterized the official as “anything” but a diplomat, since, according to Morales, Talamas cannot say that there are more important things than the death of the Guatemalan minor.

Morales has threatened to send a written complaint to her boss, OAS Secretary-General Luis Almagro, denouncing the attitude of his representative on Belize-Guatemala matters.

Morales told the media that although the information detailed indicates that the bullets of the BDF were not the ones which killed Alvarado, Barrow forgets that the death of the Guatemalan minor resulted from bullets of the organization, Friends for Conservation and Development (FCD), an NGO dedicated to the protection of the environment which works jointly with the Belize Defence Force, and which therefore formed part of the patrol.

He went on to confirm that Guatemala’s Ambassador to Belize, Manuel Estuardo Roldan, had been “recalled for consultations” since the incident occurred in April. Roldan told the Guatemalan media following the release of the expert report that relations between Belize and Guatemala have been adversely impacted by the fatal shooting. 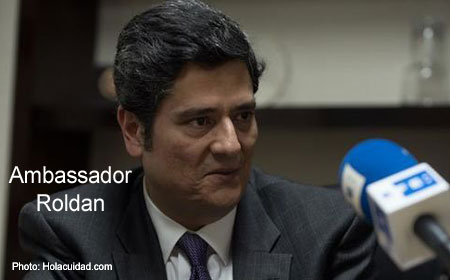 Belize Prime Minister Dean Barrow told the media recently that Guatemala had backed out of talks to establish a mechanism for operation at the Sarstoon River, the natural southern boundary between Belize and Guatemala, pending the outcome of the investigations into the Alvarado shooting.

Roldan has said that the information in the expert report is not conclusive since it was derived from testimonies which are not necessarily objective and which should be analyzed. He also questioned the chain of custody of the evidence, but did not mention the claims made in the independent expert report that Guatemalans had tampered with the scene. He said that Guatemalans wanted to have the details of who is responsible for the minor’s death.

Roldan said that the reality is, a minor is dead at the hands of Belize armed forces, and Belize, he said, cannot escape culpability.

Talamas warned that, “The incidents will continue to happen.”

Talamas held a 7-minute press briefing in Belize on Saturday, in which she said that the report was not an OAS report, but a report of the investigators from members of the Group of Friends which had answered the Secretary-General’s call for an independent investigation.

She told the press that these experts will also be investigating the killing of Belize special constable Danny Conorquie in 2014 and the attack on BDF Sergeant Richard Lambey in March 2016.

“The death of this Guatemalan boy was a very painful event—it was very painful of course a devastating event for his family, but also for the community, also for Guatemalan people, Guatemalan authorities, for the OAS and also for Belize…” she said.

“Every time a child is a victim to a tragic incident, it brings the situation to a whole other level…” she said.

Talamas held a 21-minute briefing with the Guatemalan press on Friday, when they questioned what justification Belize had for the fatal shooting of the minor.
She described the border area, which is called the adjacency zone, spanning a kilometer on either side of the Belize-Guatemala border, as “a very complex area.”

“That is to say that the reasons as to why these incidents occur cannot be simplified. In other words, on the one hand you have Guatemalan communities which face enormous socio-economic challenges. Sometimes to survive they have to turn to the culture of subsistence on the Belizean side or to poaching or to the extraction of precious timber, I mean, to be able to survive,” Talamas told the Guatemalan media.

“On the other side of the adjacency line we have natural reserves, pristine forests, species facing extinction, we are witnessing the serious effects of deforestation; the impact of climate change on the water cycle which in turn also affects the Guatemalan communities who live in the area. We are increasingly detecting the scarcity of water in the area. And to this complex situation, a new element is added which is the presence of elements of organized transnational crime,” Talamas said.

“Now I think that with the conclusion of this investigation, the time has come to perhaps turn the page; it’s the time to start the process of reconciliation and to now focus on the work that is ahead of us and which is a lot,” she told the Guatemalan press.

She pointed out that the parties still have pending the ratification of the protocol amending the special agreement; which is the compromis signed back in 2008 to have the Belize-Guatemala territorial differendum adjudicated at the International Court of Justice. She also spoke of the pending negotiations for the Sarstoon mechanism, as well as 3 of 13 bilateral agreements signed in Placencia, Belize, in 2014.

Talamas told Guatemalan reporters that the incident had occurred over 500 meters inside Belize. She added that it was not the first time that this child had returned to that area, and he had previously been detained due to poaching but was released because he was a minor.

She also told them that it had been concluded that the injuries of the father and of the younger son, as well as those sustained by the deceased, were not caused by the BDF’s firearm but by the rangers’ firearms.

The Guatemalan press probed: “Can you say who fired? Who held the firearm fire that was used?” they asked.

“We, the only thing we can do is receive the report of the forensic experts….” Talamas responded.

In an April 22 statement, even ahead of an investigation, the OAS said that its Secretariat “repudiates the death of a Guatemalan minor at the hands of a Belizean patrol, and urges both sides to redouble efforts to establish a lasting peace in the adjacency zone between the two countries.”

It added that the report of an investigation by its office at the Belize-Guatemala border would be delivered to Foreign Ministries of the respective countries for appropriate actions.

“This incident reinforces the need to observe the confidence building measures in place, in order to prevent future confrontations or situations that could put at risk the peace and stability in the Adjacency Zone, as well as in the area of the Sarstoon River,” the OAS said.

It also promotes the ICJ as “the only viable option to resolve the dispute in a peaceful and permanent way.”

Although adjudication by the ICJ would be deemed binding on the parties, there are now questions as to whether Guatemala would indeed honor an ICJ ruling that may turn out not to be in its favor.

(Amandala thanks KREM for assistance with translating portions of the press conference which Talamas held in Guatemala.)