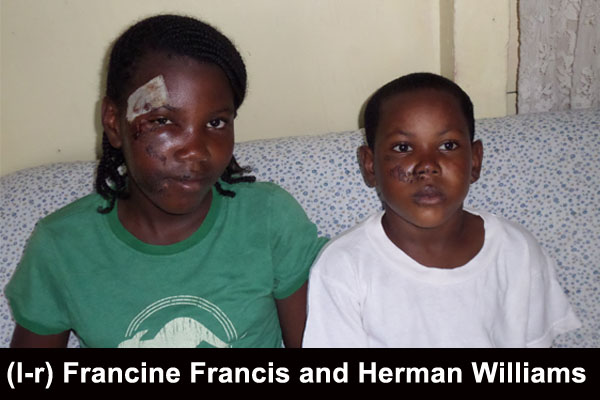 Norma Johnson, the mother of Herman Williams, 7, and his sister, Francine Francis, 12, of Police Street Extension, both students of Lake I Methodist School of Mahogany Street in Belize City, who are at home recovering from injuries they received when they were slammed from behind by a vehicle that did not stop, is calling on the hit-and-run driver to have a heart, and step up and offer financial help to her children.

The accident occurred when the children were riding a bicycle, going home after school on Thursday afternoon at about 3:30 in front of Olga’s Roast Chicken on Mahogany Street, which is also in front of the Mahogany Street Tire Shop.

Among the injuries they suffered are teeth broken in their gums, for which they require major operations.

An operation on Herman Williams will cost $1,600, but the cost of an operation on Francine, whose injuries are more extensive, has not yet been estimated.

Norma Johnson is calling on the driver who hit the children to help cover their medical expenses.

Gilroy Diego, a mechanic who was working in the Mahogany Street Tyre Shop that time, in an interview with Amandala, said that he heard a bang then heard the scream of a child. He looked out and saw two children sprawled on the pavement and their bicycle close by.

He rushed to them and saw that they were injured and bleeding. He said that at the time he saw a student wearing the uniform of Maud Williams High School and a woman wearing blue walking towards the two children, but they did not pick them up. Their vehicle was parked slightly ahead in front of the laundromat on Mahogany Street, just after the junction.

Diego said that he rushed the children to the Karl Heusner Memorial Hospital, and stayed with the children while doctors were attending to them.

While at the hospital, the grandmother of the children approached and asked if he, Diego, was the one who knocked down the children. Diego said that at the time he was not paying attention to the two persons who came out of the vehicle, and he was not sure if it was a RAV 4, but it had the spare wheel attached to the rear.

Diego said that he promptly took the children to the hospital, because he is also a father and he would want his children be taken to the hospital quickly as well. He also calls on the driver of the vehicle to render financial assistance for the care of the kids.

Norma Johnson said that the children are in pain and cannot sleep well nor eat well. She is presently unemployed and has recently become the mother of another baby, who is about 2 weeks old.

She is desperately seeking public assistance to help pay for the medical expenses of her children. Monetary donations can be made to her Holy Redeemer Credit Union Account, No 38517. She can be contacted at phone numbers 652-1777, and at 9104 Police Street Extension.