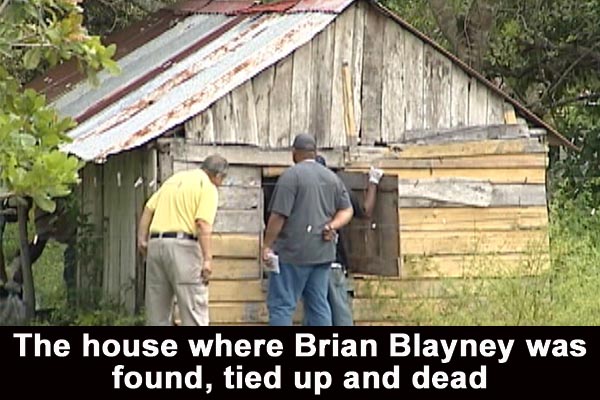 Senior citizen found tied up and dead in his bed

The residents of the quiet village of Crooked Tree, well-known for its yearly Cashew Fest, are trying to come to grips with a murder that has left their community shaken.

Brian Blayney, 74, originally from New Zealand and a resident of the village for the past 9 years, was found dead in his house in the village yesterday, at about 12:00 noon. He was found with his feet and hands tied; his nose and mouth were duct-taped, and clothes covered his head on the bed on which he was found lying.

Police took him to the Karl Heusner Memorial Hospital, where he was declared dead on arrival.

The villagers in the area began to get worried when Blayney, who owned a small shop, did not open for business as usual yesterday morning, Wednesday.

Fiona Building, a villager and a customer of Blayney’s store who lives in the area, told reporters that she went to Blayney’s house to check on him to see if he was okay, because she knew that he was having lung problems.

She began to call him, but got no response. She went to his house to get a closer look, and when she peeped through the window, she saw Blayney lying on his stomach. A sheet was over him, but she was able to see his blue jeans pants, and saw that his feet were tied with socks and his hands tied with a rope, which was hanging off the bed.

Building immediately raised the alarm. She went to the home of her neighbor, who called police. The neighbor was told by police to check Blayney and see what was happening.

The neighbor said that he immediately went to the home of his friend and neighbor, and saw him on the bed, with his two feet and hands tied, and the bedding was covering his face.

Police came and the scene was processed and Blayney was taken to the Karl Heusner Memorial Hospital, where he was deposited in the morgue, and now awaits a post-mortem to certify the cause of his death.

Police said that there were no visible signs of violence on the body.

Neighbors, however, believe that the motive for the attack was robbery, because Blayney owned a store. Information to Amandala is that Blayney, who had been homeless, was at the Karl Heusner Memorial Hospital about 8 years ago when a property owner of Crooked Tree offered to help him, and he went to live in the village.

Before the property owner died, she helped him to own and operate the shop as a means for his survival.

Villagers said that Blayney was friendly and easy to get along with, and was considered a part of the community. He had no known enemies, they said, so only robbery remained a motive for his murder.

The former vice chairman of Crooked Tree, Steve Perriott, said that there is some occasional crime in the village, but murder is not one of them. He said that Blayney was well-liked, and they know that he did not have enough money to warrant robbing and killing him.

Police have so far detained a person and are seeking another, but both suspects are from outside the village. The villagers have organized themselves, and a tomb is being built for Blayney, and he will be given a decent burial. The villagers will miss him, Perriott said.

Police have since declared the death a murder, and have started the murder investigation.