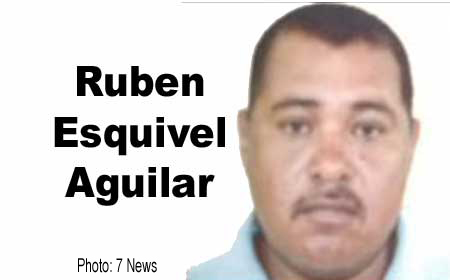 BELIZE CITY, Wed. Aug. 9, 2017–Ruben Esquivel Aguilar, 45, a Guatemalan, who came to Belize City to visit his sisters and relatives who own and operate a gacho shop on Mahogany Street, located just about a block away from the Mahogany Street Police Station, died after he was shot multiple times by one of two bandits who gained entry into the living quarters attached to the food shop.

Aguilar was shot in the head, chest and leg. After a post-mortem exam is conducted on his body, his remains will be returned to his home in Guatemala.

At about 3:30 this morning, Esquivel and his sister were sleeping in the living quarters of the gacho shop when they were awakened by movement in the other portion of the building. Aguilar got out of bed to investigate when he saw two thieves in the living room, and there was a struggle between them.

His sister locked herself in her room when she heard gunshots, and he called her name, and she quickly called police, who went to the scene, but the thieves had already escaped.

Police found Aguilar lying on the floor, bleeding, and he was already dead.

At a police press brief held at the Racoon Street Police Station at about 2:00 this afternoon, Superintendent Daniel Arzu, Deputy Commander of South Side Police, said that the intruders gained entry into the quarters through a small window.

The family told Amandala that they believe that the intruders were looking for money.

Arzu said that there are no suspects as yet.

Aguilar’s relatives also told us that he lived with his wife and family in Guatemala. He had been staying with his relatives in Belize for about two weeks.