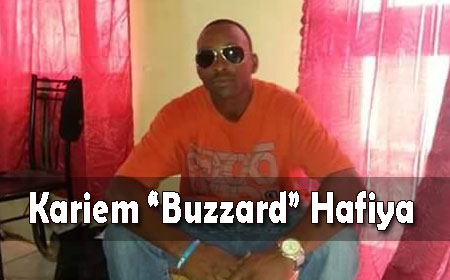 BELIZE CITY, Sat. July 9, 2016–Four children of Belize City, the youngest being one year old and the eldest being 20 years old, are now without their father, Kariem “Buzzard” Hafiya, 40, of Plues Street, a NICH Belize security guard, who was murdered on Plues Street at about 3:30 this morning.

Police said that Hafiya was returning home after his night shift at NICH (National Institute of Culture and History), and entering his back gate, when he was ambushed. The gunman approached him and fired about 15 shots at him. Hafiya was hit in the head, chest, abdomen and other parts of his body. He died on the scene.

Hafiya’s common-law wife, Arechia Flowers, told Amandala today that she was at home when she heard a barrage of gunshots. She did not look out right away because of fright, but when she did look out shortly after, she saw him by the gate. He was already dead.

ACP Chester Williams, Commander of Southside Belize City Police, during a press brief at the Yarborough Green Basketball Court, said that they are conducting the investigation from two angles.

Hafiya, he said, was involved in a dispute with a female and threats were made. Also, about two weeks ago, Hafiya was robbed on Plues Street while walking home after work. The thief has been remanded to jail.

Councillor Kevin Singh, who knew Hafiya well, told Amandala that Hafiyah was friendly and easy to get along with. When not working, he said, Hafiya would be around Singh’s Barbershop on Cemetery Road, socializing with friends. He was well-known and loved socializing, Singh said.  He added that that Hafiya was a Lodge member, and would be missed greatly. Lodge members, he said, cannot be involved in criminal activities.

Hafiya’s death comes less than two days after three men were violently murdered in the city on Wednesday. One was killed on Cemetery Road near brothers Habet Ltd., another on Castle Street, and a third at the corner of Lawrence Avenue and Jones Street.

Maloney Hyde wrote: “He never troubled a soul, never been arrested for any crime, very cool guy, always there to put a smile on the ladies’ faces. Life of the party … R.I.P., my friend, until we meet again. This is so sad.”

Ursula Welch wrote: “I got to know him for a short while, and he has this beautiful smile, a well mannerly person. It broke my heart to hear of his death. Sad. R.I.P.”