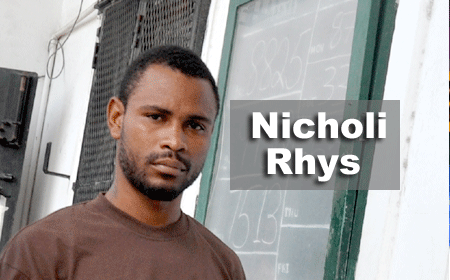 HOMELAND MEMORIAL PARK, Belize District, Wed. May 23, 2018– Around 11 p.m. on Monday night, the body of taxi driver Luis Carlos Moh, 31, was found in the bushes on the side of the road leading to Homeland Memorial Park, which is a cemetery near Mile 8 on the George Price Highway, out of Belize City.

Today, Wednesday, police reported that Nicholi Rhys, 27, had been arrested and arraigned for murder in the Belize City Magistrate’s Court in front of Chief Magistrate Sharon Fraser. He was remanded until July 27.

Rhys is a well-known figure from the George Street area. In 2013, he was found not guilty for the murder of Andre Trapp, who was the leader of the South Side Gang, who was shot on the steps of the Magistrate’s court in 2010.

Rhys was also remanded on a charge of robbery in 2014. Allegations were that he robbed Deon Lockwood of a gold chain that valued $2,000.

Rhys has also been to court for handling stolen goods; allegations were that he was found with an iPhone belonging to Earl Perez.

At a press brief held by police today, they said that Rhys killed Moh because Moh was a taxi driver for a rival gang.

In a police briefing held on Tuesday, ASP Alejandro Cowo stated that a security guard at Prosser Fertilizer called the police at around 11 p.m. to report on gunshots in the area.

When Hattieville police arrived on the scene, they observed a white Toyota Camry on the side of the road. Police searched the bushes in the area and found Moh’s body. He had been shot in the head and in the right side of the chest.

ASP Cowo reported that Moh, who lived in Kings Park, Belize City, had received a call from someone requesting a taxi ride to Mile 8 on the George Price Highway. Moh, who was accompanied by his 17-year-old girlfriend, picked up the person, a man, on Vernon Street, and continued to Mile 8. On the way there, they picked up a second man.

When they approached the feeder road that leads to Homeland Memorial Park, which is a cemetery, the men ordered Moh to turn off the highway, into the feeder road. Moh’s girlfriend noticed that one of the men had a gun and when the vehicle slowed to make the turn; she jumped out the car, unharmed. She then ran to Prosser Fertilizer where she informed the security guard to call the police.

Cowo said that Moh’s phone and other personal belongings are missing, so they presently view the crime as a robbery which turned into murder.

When asked if it was possible that the first man who led Moh to pick up the second man, had conspired with the second man to kill him, Cowo said that it seemed to be the case.

We tried to get in contact with Moh’s father, but he declined our request to interview him.