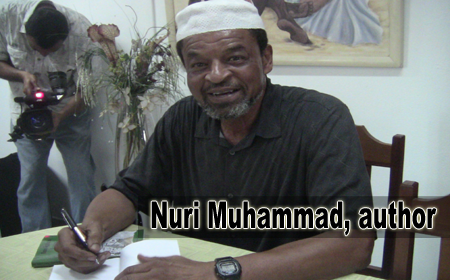 BELIZE CITY, Fri. Feb. 26, 2016–Inter-gang warfare continues to be a problem in the old capital, Belize City, despite attempts to get rival factions to enter into a truce. The first such truce was called on February 18, 1995, when 14 Belize City gangs entered a peace agreement called the Bird’s Isle Gang Truce, which was organized by the Conscious Youth Development Program (CYDP).

Nuri Muhammad, KREM TV manager, has published a new book, Insights into the Gang Culture in Belize. Speaking at the launch of his book at the Leo Bradley Library in Belize City on Friday morning, Muhammad said that the problem is deeply entrenched, but had we caught the problem 25, 30 years ago, when we started to see this new trend, things would have been different today.

Back in the early 80s, Belize’s jail had about 50 people but by the mid-80s the jail was so filled up that authorities were thinking of moving it from Gabourel Lane in Belize City to Hattieville, because the old jail could not hold the amount of males the new gang culture was generating.

“Transformation IS possible; change IS possible!” he said, adding, though, that it requires an internal change of direction, a change in character.

“If the men are not ready to change, they will not change and they will suffer,” he added.

Lincoln Kelly, who is currently employed at the Department of Youth Services, is a former member of the Crips, and a close associate of the late leader, George “Junie Balls” McKenzie, who was murdered near his home in 2007. He has decided that the gang life was not worth it. “Many times we see on the news a lot of violence and it really touches those who grow up or live here and really want to see change in the youth,” Kelly said.

Nuri Muhammad launches book on gang culture in… by adeleramosbz

In a testimonial at the book launch, Kelly recounted that he grew up in Majestic Alley, where he said the first Crips gang had originated.

“First it was just guys hanging out around the block. [Then], a friend came from Los Angeles who was already exposed to gangs and when he was deported, he brought it back home,” Kelly recalled.

He said that they were young and did not know better. Although the gang life brought them a sense of family, affording them the things they needed—love and money—it came at a high cost, with strings attached, since the youths had to rob, steal and sell drugs to maintain that support.

Kelly’s account showed how black-on-black crimes were perpetrated because of the colors people wore.

He said that he got to meet Mr. Muhammad when Muhammad was trying to get the youth out of gangs. Muhammad told us that Kelly’s change was a product of the gang truce, that Kelly exited gang life around 1996/1997 and later settled himself into full-time employment with the Government of Belize.

In introducing his book, Muhammad said that while Government has a major role to play, all the other agencies, which includes the Opposition, must be engaged. So too must the religious community be engaged. He lamented that while both the major political parties, the ruling United Democratic Party and the Opposition People’s United Party, have tried address the problem, their programs don’t generally look beyond their 5-year term of office, and furthermore, on both sides of the political fence, the party out of power tends to tear down the initiatives of the previous ruling party.

“Politics have played a negative role in the process,” Muhammad asserted.

“It is the people who have to solve that problem and the politicians have to reach across the ‘isle’,” he said.

Muhammad noted that Caribbean youth leaders have indicated that politicizing the matter is one of our main problems. Leaders have also stubbornly tried to solve the problem using mechanisms that have historically failed—something which Muhammad likened to the story of Sisyphus in Greek mythology. Sisyphus, he said, is a fictional character who rolled a big stone struggling to get it to the top of the mountain but then let it go; then he repeats the act. It is considered a form of hell, Muhammad said.

When people do the same thing over and over, expecting to get different results, it is a form of insanity, he said.