Personality of the Week: Rosita Baltazar 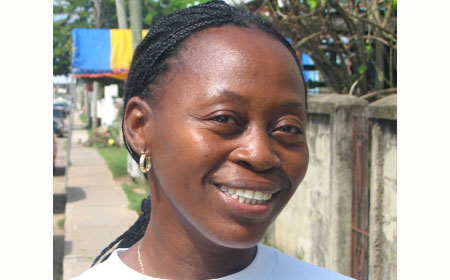 “I first danced with the Leo Mar School of Dance for 12 years. My ultimate goal, however, was to dance with the Belize National Dance Company. This I achieved and have been doing so for the last 11 years,” Rosita Baltazar, a famous and talented Belizean dancer, revealed. “My dance education took me to study dance in Jamaica, England, Florida, Mexico, and Cuba.”

Rosita has attained many crowning achievements, including a special award at the Lord Rhaburn Awards Show last December. She has also won Dance Choreographer of The Year for 6 consecutive years in the Children’s Festival of Arts. Her biggest trophies, though, are the young hearts that she’s won through her commitment to children.

Through her warm smile, choreographic dexterity, and nurturing nature, Baltazar has positively impacted the lives of hundreds, if not thousands, of young people across Belize. She has inspired and molded many of them into shining Belizean stars.

Anybody can be a dancer, all it takes is willpower, Rosita submits.

“Some people say, hmm, I can’t do that. You will surprise yourself if you make up your mind and say, I will go for it. Anybody could be a dancer, once you want to do it,” the dancer said.

Rosita says she makes a modest living from teaching dance, and she urges others to also consider dance as a career option.

“Even though some parents think that you cannot really be a professional dancer, you cannot really earn money in Belize from dancing, I mean, who knows? That is what I do. So I’ll encourage them to continue supporting the dance and continue encouraging their children,” she urged.

Each week, she teaches about 500 students, ranging in ages from 3 to 23, as a part of an itinerant dance program she said was introduced under the late Beverly Smith-Lopez, former director of the Belize Arts Council. Students pay about $10 a month for weekly sessions and the National Institute for Cultural and History through the Institute of Creative Arts also supports her.

She encourages kids to start dance training early, because they learn coordination and discipline, have fun and meet other kids. At the age of 9 to 10 years, they begin to show mental and physical maturity as dancers.

Rosita is still dreaming big, and she envisions a national school of dance, ?whereby you go there to learn dance education, and have this humungous place where there are three or more dance studios, well equipped where the kids are able to learn.?

While Rosita beams with passion for training dancers, she is equally exhilarated by performing on-stage.

“I love to be on stage,” she told Amandala. “Of course, I get to a point now where I say I’ll step aside now and just leave, have my kids in front. It’s a great feeling [I have] when after drilling them, you can sit back and just watch it!”

Dancing, on the whole, does great things for her soul, the dancer says: “It makes me a stronger person in and out, and it builds up your self-esteem. It builds up everything about a dancer. It contributes to our growth. It keeps you fit physically and mentally.”

Rosita began her romance with dance at a very young age, while attending St. Peter Claver Primary School in Punta Gorda. Being from the south where cultural dances are still a mainstay, Rosita was not yet exposed to classical ballet.

As a teen, Rosita Baltazar attended St. Peter Claver College (now the Toledo Community College), where she also maintained her interest in dance until her family migrated to Belize City, where she attended the Leo Mar School of Dance five years later.

Her childhood experiences and her upbringing have served well in shaping the individual she is today. Rosita describes her dance style as closest to the Laban: “You consolidate everything you have and come up with something of your own,” she remarked.

She acknowledges still that her foundation in dance were basic folk dances, which she still loves to perform and incorporates into her dance choreography. She has sprung from a cultural melting pot where the East Indians, Creoles, Mayans and Garinagu all hold fast to elements of their own cultural traditions.

Here in Belize City, the performances of other creative dancers motivated her to pursue formal dance training, said Rosita.

She told us that she did not find the transition from folk to classical dancing difficult. Over time, she has had the opportunity to explore various styles of dance, and she can now comfortably navigate between folk, classical and modern styles.

Her inspiration has come from other legendary dancers like Sistie Fairweather Harmes, Althea Sealey, Gregory Vernon, and Edwardo Rivero, a Cuban dance professor.

Formal dance training for Rosita began under the tutelage of Ms. Marjorie Bradley at Leo Mar. Rosita stayed at the school for 12 years. Subsequently, she was awarded a scholarship to study in Florida, USA, for a 6-month program.

She returned to Belize and became one of the founding members of the National Dance Company, now the Belize Dance Company. At the time, the dancer was in her 20?s.

She told us that she is also one of the founders of the Garifuna Heritage Foundation of St. Vincent. Her role as choreographer is to teach Garinagu in St. Vincent language and cultural dances”punta, hungu hungu, gunjei, paranda” as a part of a cultural retrieval project.

Aside from her own cultural dances, Rosita also has great love for the Creole Brukdown, East Indian and Mayan dances, as well as Latin pop.

She shares Belize’s rich cultural tradition internationally, having performed thrice in Mexico at the International Festival de Caribe, Cancun, in Florida, in Wisconsin as a part of the Sister City Exchanges with Viterbo University, as solo dancer in Malaysia at the International Music Festival, and in Trinidad and Tobago at CARIFESTA.

Rosita, a naturalized Belizean, represents the country like a true daughter of this soil, though she was originally born in Livingston, Guatemala.

She is integrally involved with the Belize Dance Company’s 15th anniversary celebrations this weekend. On Friday, there is a special performance from Senior and Center categories, starting at 8:00 p.m. On Sunday at 4:00 p.m. is the children’s show.