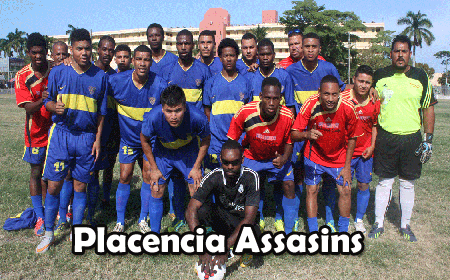 BELIZE CITY, Mon. Aug. 29, 2016–The double round-robin regular competition of the Premier League of Belize (PLB) Opening Season 2016-2017 has just completed Week 2, and only one team, Placencia Assassins FC, sports a perfect record so far, with two lopsided wins and no goals allowed, to lead all 9 teams. (See standings below.)

There was only one night game this past weekend, and it was at the Isidoro Beaton Stadium in Belmopan on Saturday night, where Police United, fresh from their first two CONCACAF Champions League outings (both losses, 4-0 and 3-0), were greeted by their Belizean hosts, defending PLB champions Belmopan Bandits, with another defeat, this one by a 2-1 score. Danny Jimenez gave Police the early lead at the 14th minute, but the Bandits came back with goals from Brazilian import Aloisio Teixeira (25’) and Frank Lopez (68’) to register their first win of the tournament.

In the first of 3 Sunday afternoon games, Freedom Fighters FC travelled all the way from Punta Gorda to take on Verdes FC at the Norman Broaster Stadium, and it was the home team taking the 3-1 win with goals from Jarret Davis (21’ PK), Orlando “Leechi” Jimenez (39’) and Darrel Myvete (70’); while Alexander “Pleck” Peters got the sole tally for the Freedom Fighters, who suffered their second loss.

Meanwhile, up north at the People’s Stadium in Orange Walk, the northern newcomers took a 7-0 thrashing from visiting Placencia Assassins FC from Independence. It was Orange Walk FC’s second harsh beating (they lost 5-1 to BDF in Week 1), while Placencia Assassins FC is red hot early in this season, scoring 10 goals so far and yet to concede 1. Dellon Torres accounted for four Placencia goals, including three in the first ten minutes (5’, 6,’ 9’ & 46’ PK); Ashton Torres netted two (61’ & 82’); and Arnie Whyte (75’) completed the scoring.

The other Sunday afternoon encounter saw home standing Wagiya FC scoring 2 goals for the home fans at the Carl Ramos Stadium, but the celebration was dampened somewhat by 2 late goals from visiting BDF FC. Former BDF, now playing for his original home town, Harrison Tasher (46’) opened the scoring for Wagiya, and Ernest “Dubu” Flores (63’) increased the lead to 2-0; but it was not enough to secure the victory over the always resilient BDF squad, as soldier Trimayne Harris struck twice, at the 79th and 86th minutes, to secure the 2-2 draw.