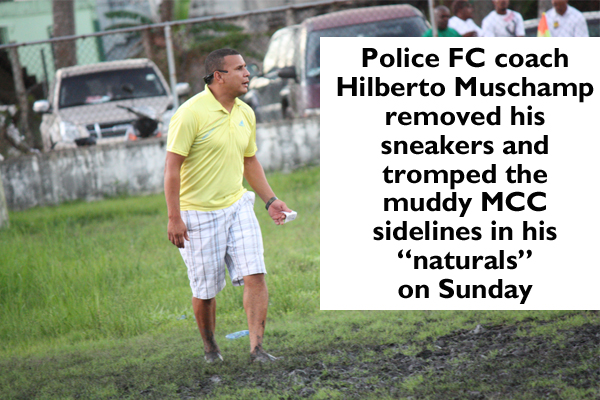 Only Verdes FC secure; 5 teams in race for other 3 playoff spots

The MCC was a muddy mess, for players as well as for game and team officials on the edge of the sidelines and on team benches; but the Premier League Belikin Cup Week 13 game was played with intensity and emotion yesterday afternoon at the football Mecca of Belize City, where the home squad FC Belize fell 2-0 to a highly motivated and talent laden Police United team, in a game that was considered a “do or die” for both clubs, but especially so for Police, in their efforts to secure 1 of 4 spots in the semifinal playoffs.

The game was fierce and physical for the full ninety, and referee Victor Williams came close to losing control of the hostilities when he allowed a Police break-away attack to continue despite it coming off an apparent “stomp block” that saw nearby linesman Gilroy Swaso wave his flag; moments later, the play resulted in the first, and what would prove to be the game winning goal for Police, as their hottest striker Clifton West scored his first of two goals at the 37th minute off a rebound from a save by FC Belize goalkeeper Glenford Chimilio.

Nevertheless, the Police team appeared more focused, determined and prepared than their opponents in executing their game plan. Utilizing the super-charged goal instincts of striker Clifton West in their starting forward line alongside the explosive Danny Jimenez, while keeping playmaker Harrison “Cafu” Roches in a supporting role just ahead of the midfielders, proved a good strategy for Police, as was their assignment of stalwart defender Kishane “Grill” Pech to special duties in blocking the attacking forays of FC Belize’s and league leading goal scorer Jarret Davis. Grill did a yeoman’s job in muscling Jarret and keeping him off the scorecard, and West delivered again in second half, at the 64th minute, after a number of Police attempts were heroically rejected by Chimilio. Danny assisted with a pass back from the left goal line for an advancing West to drive home the insurance goal for his team.

It was not a pretty game, with the muddy, heavy turf and all, but it was a highly competitive match that saw some gallant efforts from players on both teams. It is hard to single out individuals in these situations where so many players made such great contributions. Jorge Alexman played very well in midfield for FC Belize, and “Best Goalkeeper” Glenford Chimilio was also outstanding. Critical to the Police victory, though, we would have to say were the iron-will posture of defender Kishane “Grill”Pech in his game-long battle to defend FC Belize’s Jarret Davis; and the inspired attacking play of Clifton West, whose “golden touch” may be the key to Police’s realizing the once thought “impossible dream” of reaching this Opening Season’s playoffs.

In other Week 13 games, the Belmopan Bandits vs Belize Defence Force FC match was not played on Saturday night in Belmopan due to rain; and in another Sunday afternoon match, league leading Verdes FC had to come back from a 2-nil first half deficit to salvage a 2-2 draw against cellar dwelling and home standing San Ignacio United. Joel Guzman (30’) and Carl Vasquez (35’) gave San Ignacio a commanding early lead; but Verdes rebounded late in second half with goals from Marlon “El Matador” Meza (73’ PK) and Richard “Cheety” Jimenez (83’) for the 2-2 final score.

With their victory, Police now has 11 points, with 2 games remaining on their schedule. They need to win both. FC Belize’s season is over at 16 pts; but they still have a mathematical chance of making the playoffs, depending on the outcome of the other games. Police has a back match with Verdes and also a game against San Ignacio United. Verdes has their date with Police and one other game against Belmopan Bandits. The Bandits have that game and also a back match against BDF, which was postponed from Saturday night last due to rain. BDF has that game as well as a clash against Paradise/Freedom Fighters, which will also be the Freedom Fighter’s last match to close out the regular season.

So, the regular season ends this coming weekend, and “any number can still play” in this race to the 4-team playoffs.

The PLB secretariat has just released its weekly games report, and we note that, aside from the final Week 14 games this coming weekend, the two back matches are also scheduled for this Wednesday night.

(FC Belize is looking on and praying, as their regular season is already over.)