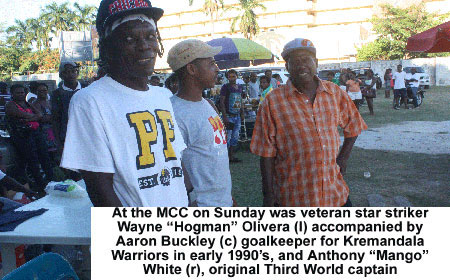 BELIZE CITY, Thurs. Aug. 27, 2015–FC Belize is officially out, and with 6 teams remaining, the Premier League of Belize 2015-2016 Opening Season is already in full swing, with 10 regular season weeks before the top-4 playoffs.

With the competition schedule adjustment, after the withdrawal of FC Belize last Friday, Placencia Assassins and Police United FC now have a Week 2 back match, scheduled for September 19 at the Michael Ashcroft Stadium.

There were two Week 2 games this past weekend.     At the FFB Stadium on Saturday night, visiting Wagiya from Dangriga got on the score card early through Eugene Martinez (1’), but home standing Belmopan Bandits replied before the half with goals from Evan Mariano (39’) and Marlon “El Matador” Meza (44’), and held on for the 2-1 victory.  On Sunday afternoon at the MCC Grounds in Belize City, after a scoreless first half, midfielder Jesus Patino centered for Deon McCaulay (54’) to put visiting Verdes in front, but home squad BDF got a late tap in from Orlando Trapp (82’) off a free kick by John King, to knot things up at 1-1, the final score.

With an even number of teams (6) in this PLB tournament, all teams will be active each weekend, except for Week 2, where the previously scheduled Placencia Assassins vs FC Belize match was erased from the schedule, and replaced by what is now a back match – Placencia Assassins vs Police United FC.  See Week 2 standings below:

The competition then takes a break on the weekend of September 5-6, due to the World Cup Qualifiers against Canada on September 4 in Toronto and September 8 at FFB Stadium.

It resumes with Week 4 games below: