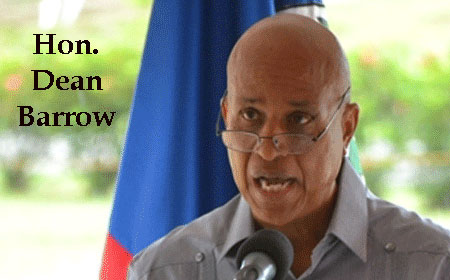 BELMOPAN and BELIZE CITY, Mon. Sept. 21, 2015–On Monday, September 21, 2015, our nation took time out to celebrate thirty-four years of Independence and to honor our forefathers whose struggle and determination brought about the freedom we celebrate today.  In attendance at the official ceremony of the Independence of Belize, which got underway in the nation’s capital, Belmopan, on Monday were the Prime Minister of Belize, Hon. Dean Barrow; Leader of the Opposition, Hon. Francis Fonseca; the Governor General, Sir Colville Young; the Chief Justice, Kenneth Benjamin; the Mayor of Belmopan, Khalid Belisle; members of the clergy, and many other government officials, dignitaries and ambassadors who came from near and far to celebrate this festive occasion with us.

In his address, Prime Minister Barrow said, “September 21, this year, arrives to the accompaniment of an even greater than usual celebratory course, and the multiple positive developments occurring during the first three quarters of 2015 have appeared to reach a flood just in time for Independence Day …”

One of the main issues the PM addressed was that of the wind-up of negotiations for the settlement of the acquisition of Belize Electricity Limited (BEL) and Belize Telecommunications Ltd. (BTL). He said that the settlements for the two utilities are “vindication of our nation’s patrimony” and that these utilities “are ours to have and hold forevermore.” He also added that small shareholders will get seats on the boards of both BTL and BEL, and that 10 percent of the shareholdings of both companies will be offered to the Belizean public.

We have been “boot-strapping” the poor and “expanding the middle class,” said PM Barrow.

The economy is doing well, said the Prime Minister, who added that the shrimp industry will recover from recent setbacks.

He further mentioned that since March, 20 million of Petrocaribe funds have been spent in village constituencies.

On the matter of tourism, PM Barrow said that tourism should remain our single largest driver, and that we should expect a “tourism explosion” in San Pedro, and he also mentioned that a paved highway to Caracol is in the works.

These improvements should mean “a huge tourism boost” for the country, he said.

Where the BDF, police and Coast Guard are concerned, the PM said that a $30 million loan from CABEI (Central American Bank for Economic Integration) should result in better crime-solving and a better conviction rate for the police with a forensic facility, increased resources and better policing; the BDF will get more assets to assist with border patrols, etc; and the Coast Guard will get two new vessels that will assist them with their maritime duties and illegal drug interdictions.

The PM said that $37 million will be spent on south-side constituencies in Belize City, and that the money will be used to improve streets and drains as well as for “land reclamation and land fill; construction of new homes and home improvements; education, training and social development.”

Perhaps one of the most weighty announcements the PM made was that his government will build a Forward Operating Base (FOB) on the north bank of the Sarstoon River, and he took a dig at the Belize Territorial Volunteers and the Northern Territorial Volunteers, the two main organizations which have been a thorn in his side, severely criticizing him and Foreign Minister Wilfred Elrington for their lackadaisical stance in protecting Belizeans in Belizean territory, to wit, Sarstoon Island, which has been claimed by the Guatemalans, by saying that his government would build the FOB and that “we don’t need civilians to complicate matters.” The BDF has the ability “to take care of business,” the Prime Minister said – a clear, already-repeated piece of advice to the BTV and the NTV to stay out of the area.

In the matter of the Karl Heusner Memorial Hospital (KHMH), the PM said that the Government of Belize has heard the cry of the KHMH workers and in response will provide the salary increase specified in the agreement.

In return, he said, the Government expects the workers to be more efficient and effective in executing their duties. He revealed that the debt owed by Belizeans who accessed the services of the KHMH at the end of 2014 stood at $9 million. He continued that his government will write off this debt of $9 million owed by the public as this year’s Independence gift to the people from the Government of Belize. He added, “For the sake of completeness and to make that gift even greater, we will also forgive all monies currently owing by patients at the government hospitals throughout the country; this amounts to another $2 million.”

Also, the Leader of the Opposition, Francis Fonseca addressed the nation. He said, “Thirty-four years of Independence, 17 years of PUP, 17 years of UDP, our responsibility and obligation is to work together in good faith to change, improve and strengthen the failing systems and structures we have in place to govern and develop Belize … On this 21st day of September, let us resolve to renew our commitment as a nation and people to build a society based on equality, justice and opportunity. This must not only be our hope and dream; it must be the foundation of who we are as a people. Governance is the hallmark of a democratic, peaceful, just society and it is fundamental to eradicating poverty and corruption, bringing about economic growth and social progress…”

Hon. Fonseca said that the events of August 16, 2015, at Barranco, Toledo (Sarstoon Island), where Guatemalan gunboats tried (and succeeded in one instance) to prevent Belizean boats from landing on Sarstoon Island, and actually accosted a vessel in which there were Organization of American States (OAS) representatives, who went to observe the event, were “a powerful statement” that “all of Belize is ours to protect and defend,” and that “empty, clamorous rhetoric” cannot help us properly patrol our borders.

Diane Haylock, Co-Chair of the National September Celebrations Commission, remarked that thirty-four years has allowed us to better understand the reason we sought Independence. She continued, “It was about discovering that we as a people had the moral fortitude, the intellectual aptitude and the right to seek a way of life in which liberty, equality and prosperity would create the foundation of a resolute democracy … as we continue to face challenges such as an unresolved territorial claim to our country, the crime and the violence and the responsibilities that we are faced with as we try to provide a sustainable livelihood for all our people.”

The Mayor of Belmopan, Khalid Belisle welcomed all those in attendance to the capital. He reflected on that new day for all Belizeans, when Hon. George Price came to Belmopan for the handing over of the official instrument of the Independence Constitution. He continued, “I suspect that amidst the joy and jubilation there was an equal mix of uncertainty.” He said that the thirty-four years’ journey has been a colorful one that is full of progress in many shapes and forms.

He added, “Belize renewed, a rejuvenation long overdue, but in progress. Belize confident: certain that together no obstacle is too great, no challenge insurmountable. Belize competitive: improving our capacity and ability to contend in a globalized world. Belize committed: we all have a collective role in the game and there is very little room for any other agenda, other than the Belizean agenda to be advanced.”

In his speech, Bradley said, “Independence is not a day. It is a journey.” He noted that this journey began thirty-four years ago and was one filled with promise. He continued “… It is fitting that on a day such as this, we pause to celebrate that journey, that we applaud the successes that we have made, that we consider the challenges that we face, and that we strengthen our resolve to continue on that journey not with any spirit of skepticism or fear, but with the enduring hope of victory and the fervent belief that we are a people destined for greatness and that we can and will overcome.”

Bradley continued, “As the inheritors of this land it falls to us to chart the future of this our Belizean nation. That future is not one of ease or resting, but one of incessant striving so that our nation may prosper and long endure.”

After Bradley’s speech, the winner of the Patriotic Song Competition entertained the audience with his winning song: “Belize Renewed”. Then there was a cultural presentation by the Belize National Dance Company. The ceremony came to an end and due to the rain, the parade that was scheduled to follow the ceremony, was cancelled.