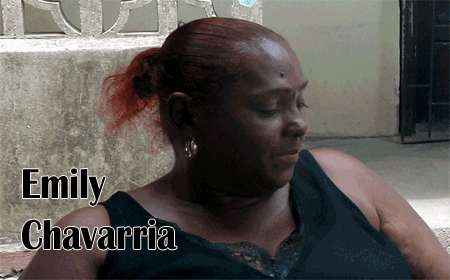 BELIZE CITY, Wed. Apr. 13, 2016–The naked body of a grieving mother, Emily Gabourel Chavarria of Ladyville, was exposed by police who went to her house to search for drugs and/or ammunition.

Chavarria told Amandala today that at about 6:00 this morning, at her house in La Milpa Estate, Ladyville, she was getting ready to go to work when she heard a loud banging on the door and a voice from outside shouted, “ Police, open the door before we break it down.”

Chavarria said she shouted at them, “Give me a break so I could put on my clothes.”

She said that the banging was loud, so she went to open the door before they broke it down. Police, she said, barged into the house, and one of them pulled the towel from around her, exposing her body.

Chavarria said that they did not announce their mission to her house immediately; it was when she exchanged words with them that they told her that they were searching for guns and drugs, and one of them, she added, told her that they would beat her like a man and forget that she is a woman.

Police, however, found nothing illegal, in the house.

Chavarria is angry with police for exposing her, saying that in addition to the fact that her nakedness was exposed, her grandson, 3 years old, was with her in the house when the Canine Unit dog brought by police began to go into the rooms, sniffing.

Chavarria told them that her grandson was allergic to dogs because he suffered from asthma, and she was told to shut up. She refused to “shut up,” however, and so, words were exchanged between them.

She said that the police left her house but came back shortly after and searched the houses in the area, but again, nothing was found.

Chavarria’s son, Rene Chavarria, was shot down and killed on the night of March 18 on Marage Road in Ladyville. She said that despite the fact that a man told the police that he knew the killers, no one has yet been arrested. She is calling on the police to investigate her son’s death instead of harassing her.

Amandala asked Chavarria whether she thought the reason for the action against her by police was that her son was reputed to be a leader of the Rocky Road gang, and that police may have believed that he may have hidden drugs or a gun in the house.

Chavarria strongly denied the accusation, and said that there were no guns or drugs in her house.

Orson Picart, of KREM Radio, suggested that she go to the Internal Affairs Division of the police and make a formal complaint against the police’s abuse, but she replied that she doesn’t want to have anything to do with police, because she does not believe that she will get any justice from them, and that she has concluded, based on the way things are going, that the killer of her son will not be found, and she does not believe that she will get justice for his death.

Chavarria’s son, Jaime Chavarria, was shot and killed by an unknown killer in April last year while walking through an alley on Berkeley Street, Belize City; her second son, Rene Chavarria, was murdered while riding a bicycle on Marage Road, Ladyville. The family is now grappling with the deep hurt resulting from the loss of the two sons.