Home Highlights Police manhandle the media in the House of Representatives!
Highlights

Police manhandle the media in the House of Representatives! 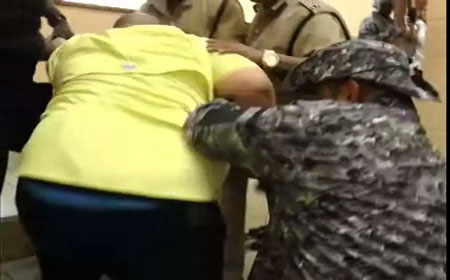 BELIZE CITY, Mon. Aug. 29, 2016–The meeting of the House of Representatives on Friday will go down as unprecedented in the history of this country because of the chaos that followed both outside and inside of the House, when an Opposition People’s United Party parliamentarian was dragged out of the House by Belmopan police, who disgraced themselves by manhandling the media for no good reason.

Police manhandled some members of the media and dragged Channel 7’s news director, Jules Vasquez out of the gallery from where he was recording the House’s proceedings.

Who gave the order for the police to drag media representatives out of the gallery? The media was only doing its work, after all.

“On Friday, when you cleared out the gallery in the House of Representatives, under whose authority were you acting?” Amandala asked Howell Gillett, the Officer commanding the Belmopan Police formation.

“With the authority of the Speaker of the House; we were directed by the Speaker to clear the gallery,” Gillett said, “and the media.”

House Speaker Michael Peyrefitte told Amandala tonight that he did issue instructions to the police, as well as the Sergeant at Arms, Brian ‘Yellowman” Audinett, to have the galleries cleared, and that included the media.

Peyrefitte said that the purpose of having the media removed was not because he did not want the ejection of Espat to be recorded, but, ironically, because he intended not to make a spectacle by having people “booing and cheering” in the galleries. He said that the media has in the past left the gallery, but kept their cameras rolling.

Gillett insisted that, “the police practised a lot of restraint with the media and with Hon. Espat, before we made any decision to remove anybody, because that is one of the last things that I want to do, is to hurt our people.”

“I hate to resort to that kind of policing, but if it comes, we have to deal with it,” Gillett explained.

Amandala asked Jules Vasquez for his reaction to being forcibly removed from the House by the police.

“I told Howell, you did not inform me. You did not tell me that you were moving me on the authority of the Speaker of the House,” Vasquez said.

“Will you be doing any kind of follow-up regarding your ejection from the House?” Amandala asked Vasquez.

“I am quietly investigating a lawsuit, not for myself, but for the media. The media, you just can’t just throw us away like a dishrag. There has to be some intrinsic place that the media has which is non-negotiable, that our pride of place is respected, that it can’t just be there at the pleasure of this one or that one. Something has to be done, that we just can’t be hauled and pulled. There has to be some intrinsic value that the press has in a democracy,” Vasquez said.

Vasquez added, “They [the police] spoke to me in various ways, but none of them said the Speaker said you have to go.”