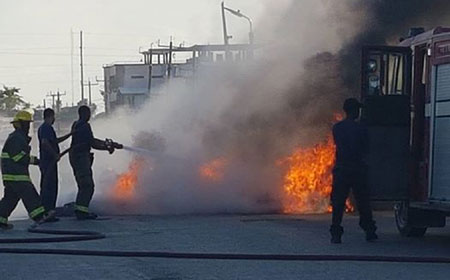 BELIZE CITY, Mon. Oct. 3, 2016–On April 20, 2005, the BelCan Bridge recorded a dramatic clash between police officers and supporters of the then Opposition United Democratic Party (UDP), joined by university students.

That clash was a part of a sustained campaign against the administration of former Prime Minister, Said Musa, which had allegedly engaged in massive corruption.

Eleven years, five months and three days later, BelCan Bridge would again record another clash between civilians and the state.

However, this time it would be against the ruling United Democratic Party (UDP) government, under pressure by the Belize National Teachers’ Union, which is engaging in continued industrial action until government favorably responds to its 8-point demands for better governance.

Sometime after 4 p.m. today, after the Belize National Teachers’ Union (BNTU) had concluded its membership meeting, fire fighters and police officers responded to a fire on Belcan Bridge.

Several tires were burning wildly, as thick, black clouds spewed overhead, and the fire created a delay in the flow of traffic until it was contained by the Fire Department.

The executive director of the “Days of Healing” movement, Perry “Stickz” Smith, and Fitz Howard, 35, a member of the Citizens Organized for Liberty Through Action (COLA), had been immediately detained by police, who quickly arrived on the scene.

Smith was first handcuffed and put in the pan of a police pickup truck, but he found his way out when police turned their attention to Howard, who, they said, was his associate.

While Howard had been refusing to be arrested, Smith, handcuffed, attempted to walk away from the police mobile unit but was re-apprehended by police.

The duo had been transported to the Queen Street Police Station, where their attorney, Kareem Musa, had been waiting for them.

Musa told Amandala that police officers simply recorded personal and contact information from the men and told them they were free to go.

Smith and Howard continue to maintain their innocence, saying they had nothing to do with the fire.