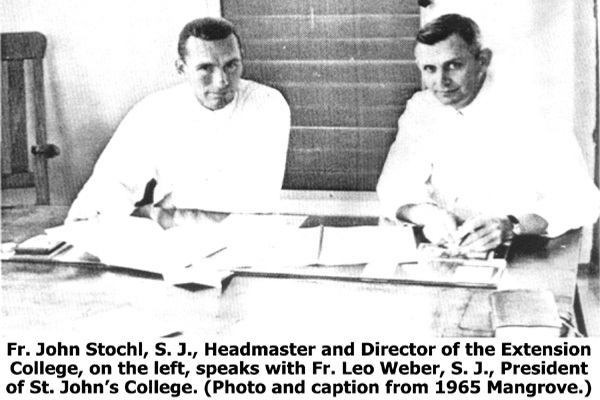 1964 was the year when British Honduras attained internal self-government, it was the year when the school holidays were arbitrarily changed from April and May to July and August in order, apparently, to coincide with the school holidays in the United States, and it was also the year, in late August or early September, when St. John’s College Sixth Form went co-ed, with a class of young ladies who were mostly from the St. Catherine Academy’s graduating class of 1964. There were also at least three young ladies from Cayo, I remember that clearly. In fact, one of these young ladies later married one of my classmates from the SJC high school graduating class of 1963 – Alvaro Magaña. Alvaro told me that when I ran into him in San Ignacio a few years ago, after not having seen him for almost five decades.

Between January and June, say, of 1964, we who became the 1965 graduating class of SJC Sixth Form had begun our Advanced Level studies on the southern side of the traditional high school campus under the supervision of Fr. Ronald Zinkle, S. J. That class included the late Neil Garbutt, Julian Castillo, Carlson Gough, Pedro Carrillo, Carlos Perdomo, the late Roger Silva, Lennox Vernon, Marion Paulino, Alexander Monsanto, and Daniel Castellanos.

Our Sixth Form class did our “A” Levels in a year and a half, instead of the usual two. January to June ’64 was our half-year. Then late August or early September ’64, we moved across to two one-flat buildings on the eastern side of the Landivar campus. These buildings had previously housed students from Central America who used to be known as “internos,” because they lived on the campus. (Students from the old capital city were called “externos.”) Most of these internos were children of the wealthy ruling families and high ranking military in this region, and I think they came here primarily to learn English. But by 1964, the internos program had come to an end, for whatever the reason(s), and thus these buildings became available for the more ambitious junior college program on which the Jesuits were now embarking.

So here were girls and boys (young ladies and young men) crowded together, mostly in the one building north and east of the other building. The building to the immediate south and west of the first named, was for science laboratories. Zinkle had his office in the first named building (the two buildings were very close to each other), and it appeared one of the young lady students, out of the 1964 SCA grads, became his secretary. No one ever knew what process was involved in that choice and that appointment.

Along with the young lady students who began to prepare to sit the “A” Levels in 1966, came a class of young men students, what we called “first year,” mostly from SJC. These included Denton Belisle, Santos Mahung, Greg Pott, Ivor Burns, Norman Quan, Norman Briceño, and others.

Amongst the new students was a young man who had done his first year of Sixth Form in Jamaica and was only now joining our second year class. His name was Geoffrey Frankson, and he ended up winning the 1965 British Honduras Open Scholarship based on the 1965 “A” Level results. (Julian Castillo won the second Open Scholarship.) Frankson went on to become a Rhodes Scholar and a physician in Trinidad, I think.

Now remember, I am talking about fifty years ago, so I stand to be corrected at any time where minor details are concerned. For me, this particular, personal column came up because the SCA ’64 graduating class just finished holding a reunion in Belize. Out of that reunion, the issue of Zinkle arose for me, after all these years.

The girls in the first-year class quickly realized that Zinkle had a crush on the SCA ’64 grad whom he had made his secretary. The priest had fallen in love. One of those first-year girl students reminded me of an incident wherein Zinkle had spoken in a rough and reprimanding manner to her because of his having gotten the false impression that she had disrespected his favorite in some way. His behavior affected her deeply, she was just 17, and her father ended up going to the Sixth Form and accosting Fr. Zinkle. A brave man, that father, and I give him big respect.

In almost all cases of problems between the priests and nuns, on the one hand, and native students on the other, Belizean parents swallowed whatever the hurt and urged, pressured their children to do the same. This was a time when it seemed to most Belizean parents that they depended desperately on the priests and nuns for their children to get an education and an opportunity for a better life than they, the parents, had lived.

What I am saying to you is that the priests and nuns had inordinate power back then. I am sure the same situation prevailed in the case of the Anglican and Methodist clergy who ran the other religious school programs. If you were a Belizean child/youth and you got into any problem with the foreign teaching clergy, you were wrong from the get go, no matter the facts of the case. We students were colonial subjects, just five or six generations removed from slavery.

In 1964, that expanded, co-ed Sixth Form was a major undertaking by the Jesuits. The SJC President at the time was Fr. Leo Weber, S.J., who remains an absolute legend in school and church circles. In fact, the current SJC President, Jorge Espat, told me recently that Fr. Weber continues to raise money in the United States for SJC’s support. Leroy Taegar once said to me that Leo Weber would have become what they call the “Black Pope,” that is, the international leader of the Jesuits, but for a heart condition. Leo Weber was the greatest thing that ever happened to SJC, but Zinkle has to be considered his appointment. And the evidence indicates that Zinkle couldn’t handle the power.

The thing is, I always thought my problems with Zinkle had to do with our personalities rather than with his power. But, the more I’ve talked with the lady students from that Sixth Form class, the more I’ve heard stories of their having individual problems with him. Perhaps it was the first time he had ever really fallen in love, and he didn’t know how to handle it.

I’m grateful for my Holy Redeemer and SJC education, and I am not looking to open a can of worms. The point has to be made, nevertheless, that no matter how powerful institutions become, they are run by human beings. And, jump high or jump low, human beings are flawed creations. When the circumstances change, they themselves can change, for better or for worse. In sports, we say that when the games get bigger, certain players also become bigger. But, other players become smaller. It seems to me that Ronald Zinkle had never before held the kind of power that he was handed in the summer of 1964 at SJC Sixth Form. He didn’t handle that power very well. Check the stats.