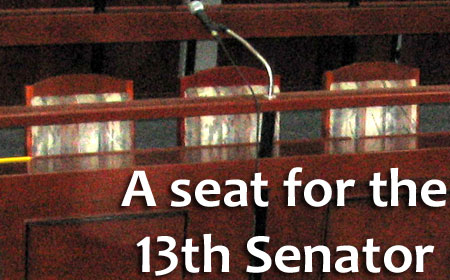 BELIZE CITY, Wed. May 6, 2015–The Leader of the Opposition, the People’s United Party (PUP), Hon. Francis Fonseca, through his attorney Eamon Courtenay, S.C., filed an application at the Supreme Court today, seeking an order for Prime Minister Dean Barrow to bring into force the provisions of the March 2010 Sixth Constitutional Amendment enabling the appointment of a 13th senator.

The announcement was made this morning at the PUP’s Independence Hall headquarters, where Fonseca and Courtenay held a press briefing.

In the fixed date claim, Dean O. Barrow is named as the first defendant and the Attorney General as the second defendant.

Late this evening, Government responded to the PUP’s claim via a press release, which lamented, “That senator would be chosen by the non-government organizations, and would result in taking away the Government’s majority in the Senate. In turn that would mean that the Opposition, with the support of the 13th Senator and others, would be able to frustrate Government’s legislative agenda and delay or completely derail (even urgent) Bills.”

The release adds: “The government sees this claim as another desperate attempt by a political party that has been repeatedly and roundly rejected at the polls, including as recently as January and March of this year, to thwart the will of the people and gain power other than by way of the ballot. Spectacularly unsuccessful in elections, the PUP is seeking redemption through flimsy legal maneuvers and empty posturing.”

It added, “Government points out that a similar claim was brought before by COLA back in 2010. The judge dismissed the case in its entirety, reaffirming that the Prime Minister has wide discretion, when given that authority by Parliament, as in this case, in deciding when to bring legislation into force. Section 23 of the Act the PUP is now litigating clearly states: ‘This Act shall come into force on a day to be appointed by the Prime Minister by order published in the Gazette.’”

The release goes on to say, “In no other parliamentary (as opposed to presidential) system is the appointed Senate or Upper Chamber controlled by those in (potential or formal) opposition to the Government. In every Commonwealth Caribbean jurisdiction and throughout the larger Commonwealth world, it is the Government that appoints the majority of the Senate.”

This present rationale appears to be a sharp departure from the original intent of reform pledged by the UDP. The idea of appointing a 13th senator has its genesis in a reform pledge made by the then Opposition United Democratic Party (UDP) in its 2008-2013 manifesto, which stated: “To restore and maintain good governance, the UDP will: Reform the Senate to ensure that those senators nominated by the Opposition and non-governmental organizations together constitute the majority.

“Empower the Senate to initiate and conduct public inquiries into mismanagement or corruption by officials in central government or statutory bodies.”

In his presentation this morning, Fonseca said: “Mr. Barrow and the UDP pledged and promised the Belizean people to restore and maintain good governance by reforming the Senate to ensure that those Senators nominated by the Opposition and NGOs together constitute the majority and by empowering the Senate to initiate and conduct public inquiries into mismanagement or corruption by officials in Central Government or statutory bodies. Barrow and the UDP have now abandoned the pledge, broken this promise and have turned their backs on governance reform and accountability.”

Upon assuming office with a super majority, the UDP government of Prime Minister Dean O. Barrow passed the Sixth Constitutional Amendment which was signed into law by the Governor General on March 30, 2010.

Between April and November 2010, all of the other provisions of the Sixth Amendment, except Sections 7 and 9, which spells out the process of appointing the 13th senator, were signed into law by enacting the necessary Statutory Instruments.

So although the Sixth Amendment became a part of the Constitution, which is the supreme law of Belize, Prime Minister Barrow decided that he would not bring those two provisions of the amendment into law.

The 13th senator, who should be appointed from among the non-government organizations, became the subject of litigation when Belizeans for Justice and Citizens Organized for Liberty through Action (COLA) filed a claim in December 2010 in the Supreme Court based upon their “legitimate expectations that a 13th senator would be appointed.”

In an interview with 7News’s Jules Vasquez in August 2010, Prime Minister Barrow famously stated: “It ain’t going to happen! I’ve made the point, perhaps this is the first time I am able to do so to you, but I have not been shy at all of saying this, giving the way the Opposition fought against all the reform measures. Given the way the Opposition has demonstrated – and I am not faulting them – its determination to be completely non-cooperative, Restore Belize being a case in point, I do not see at this stage giving over control of the senate to the Opposition even if it would have to be in conjunction with the social partners, I am not going to do it.”

In outlining the present claim being made by the Opposition, Courtenay said, “The purpose of the claim is to correct the completely unlawful, illegal, unconstitutional and arbitrary action of Dean Barrow, the Prime Minster of Belize. Hon. Francis Fonseca is going to ask the Supreme Court to declare that the Prime Minister is acting unconstitutionally and unlawfully, yet again – and most importantly, we’re asking the Supreme Court that if they agree that Mr. Barrow is yet again acting unconstitutionally, to make an order directing him to bring section 7 and 9 of the Sixth Amendment into force within 30 days.”

In another interview on November 2013, PM Barrow said that to appoint the 13th senator would bring about “paralysis of government.”

“No, the 13th senator will then mean that the Senate will be controlled by the Opposition and non-government senators and they will have the power to paralyze the government. I am very sorry – I am the one who pushed it into a UDP manifesto, and this government pushed it forward in terms of constitutional reform. But then I quickly realized it is a wonderful idea but in practice, it will make no sense. The opposition is there to oppose, the so-called social partner sectors are not there to be friends of the government. And if you gave control of the chamber to that combination, I am telling you there will be paralysis.”

Courtenay, however, is not buying into the PM’s paralysis theory. He said, “The Prime Minister knows, and we know, that that is a lie. It is untrue, and it is not a fact that the 13th senator can lead to paralysis. It is disingenuous for the Prime Minister to say that the appointment of a 13th senator would frustrate his government and cause deadlocks like what occurred in the United States when the United States Congress refused to pass an Appropriations Bill or a continuing resolution and, therefore, brought the government to a halt.

“Dean Barrow, the lawyer, knows the Constitution of Belize. Dean Barrow, the Prime Minister, knows how the system of government works. He knows as a fact that Sections 78 and 80 of the Belize Constitution provide a safeguard against a Senate choosing not to pass legislation that has been passed by the House of Representatives.”

Fonseca said, “If there was a 13th senator, it is very clear that there would have been a Senate Special Select Committee to investigate the UDP Penner immigration scandal. The UDP used their majority in the Senate to block this inquiry.

“Similarly, the motion tabled by Senator Mark Lizarraga representing the business community in November of 2014, which sought to have the UDP government provide an explanation, an accounting of unauthorized expenditure of millions of PetroCaribe funds, was also blocked and thwarted by the UDP Senate majority.”

Fonseca also stated that five years is way too long a period to have passed without the Prime Minister putting into force the 13th senator, so now, the Supreme Court will set a date for the hearing of Fonseca’s claim against the Prime Minister.