Put up or shut up, AG Peyrefitte tells 200 pastors 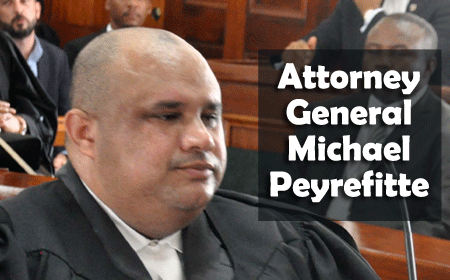 The Attorney General said that if the pastors want to change laws, they should run for office

BELIZE CITY, Fri. Nov. 3, 2017–Two days before the government’s amendment to the Misuse of Drugs Act which decriminalized 10 grams of marijuana, the National Evangelical Association of Belize (NEAB) held a press conference on Tuesday, October 31, at which they condemned the new law. The new measure was signed into law by the Governor General yesterday, Thursday, after Attorney General, Hon. Michael Peyrefitte gave the green light that all was in order with the new law.

Notwithstanding the bi-partisan support that the decriminalization measure enjoyed, the NEAB, at their press conference and in a media release, threatened to march on Belmopan.

Today, in answers to reporters’ questions about the harsh criticism by the NEAB of the decriminalization law, Attorney General Peyrefitte reacted, saying, “Let me be very calm. I’ll try to be very calm about the church the way I try very hard to be calm about the CCJ. Given what the church has been found guilty of in recent years, I think priests and pastors have no moral authority to try and judge anybody out here who wants to smoke marijuana. They just object for objection’s sake.”

Peyrefitte was asked if it was true, as the NEAB had said, that the government ignored their package which contained the objection of over 200 pastors.

“…They are pastors in their churches. They need to go preach in their churches. If you want to make legislation, pastors, you put your name on a ballot, you run for office. If your party wins and you get into Cabinet, or you‘re the Prime Minister or the majority in the House, then you can pass whatever law you want to pass. You are a pastor; be a pastor. You want to be a lawmaker, then you come and you be a lawmaker; you offer yourself to the people,” remarked Peyrefitte.
The Attorney General further went on to state, “Of course we listened to what they said; we listened to what everybody had to say. But at the end of the day, as the lawmakers, the members of the House, the members of the Senate had to then come up with what was best for everybody. We are not dictated by what the Church wants. We are not dictated by what the BNTU wants, or what the Mayas want or the Garinagu or the Creole or the Mestizo [want]; we are dictated by what’s in the best interest of everybody.

“And for those who want to yell and talk from the cheap seats, come down, put your name on a ballot, run for office and then you can pass the laws you want or repeal the laws that we just passed. Until then, just shut up.”

The NEAB and the Belize Council of Churches are two of the organizations representing the churches of Belize. It is, however, from The Belize Association of Evangelical Churches (BAEC), and the Council of Churches, that the Church Senator for Parliament is selected on an alternating basis.

In the debate in the Senate on the Amendment to the Misuse of Drugs Act, the Church Senator, Senator Ashley Rocke, voted against the measure, but the bi-partisan support that was given to the bill, guaranteed its passage through the lower House.

Amandala asked the president of NEAB, Pastor Lance Lewis, to respond to the comments made by Attorney General Peyrefitte.

“I think that the remarks that the Attorney General made were very inflammable and very vitriolic”, Pastor Lewis said. “I think he sounded vexed, and he has an agenda,” he went on to say.

Pastor Lewis added, “The Church only made a statement against the decriminalizing of the 10 grams of marijuana. But he has his focus, which was to get the law passed. We need to have a voice from every angle of the society. This is democracy. Where is the democracy?”

Pastor Lewis said he wants to know what the Attorney General means when he said that the church has lost its moral authority.

Another member of the NEAB, Pastor Luis Wade, told Amandala, “I believe that the Church has only disagreed with the government on two principal issues. One is the LGBT issue and the other is the decriminalization of marijuana issue.”

Pastor Wade remarked, “The church has a moral obligation to speak out on these issues, but it seems they [the government] have no interest in opposing views. When you oppose, this comes against you as though you are an enemy of the state.”

“You have to bear in mind that he was not speaking as Michael Peyrefitte, but as the Attorney General of Belize,” Pastor Wade said.

Pastor Wade continued: “He has declared the Church was guilty, and then he took away the Church’s moral ground. Then he sent the pastors back to Church and told them to shut up.”

Pastor Wade concluded that the Attorney General “has no explanation and has expressed his anti-church bias.”