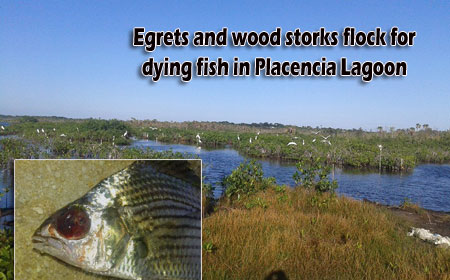 PLACENCIA, Mon. Feb. 9, 2015–Chief Environmental Officer Martin Alegria told Amandala today that the Department of the Environment (DOE) will continue to investigate the cause of a fish kill reported in Placencia last week.

The DOE says that on Wednesday, February 4, 2015, it received reports of a fish kill occurring in the Placencia Lagoon, Stann Creek District, and it also received pictures of the fish kill showing the dead fish and numerous birds in the area. The DOE reported, however, that it visited the area in question but did not observe any evidence of the fish kill, and it added that its officers conducted onsite water quality assessments, which determined that the water quality of the marshland was normal.

DOE personnel collected water samples to conduct testing on the nutrients level of the marshland waters, since higher levels of certain nutrients could lower the amount of oxygen available to organisms, thus resulting in a fish kill. The results of those tests are pending.

The original report of the fish kill came from a resident of Independence, Stann Creek District, who, being concerned, posted on Facebook a set of photos of what he observed around the Placencia Lagoon, west of Placencia Village, where he said he had seen dead fishes floating, as well as some dying in the water.

“Fishes have no eyes. What do you thing is going on?” the villager questioned.

He told us that this is the first time he observed a fish kill in the area. The villager told Amandala that there were about 30-50 dead fishes in his view, and he also saw scores of birds, great egrets and wood storks, feeding on the fish that were dying at the water’s surface. He said that the birds or crabs, which he saw at the water’s edge, could have eaten out the eyes of the fishes.

The concerned citizen said that he spoke to a fisherman who is a tour guide in Placencia and asked him what he thought was happening, and the fisherman said that the fish were probably dying because there was no oxygen in the water.

He said that the water level was pretty low and it was very warm. He also indicated that there are several shrimp farms in the area, and one is particularly close to where the fish kill occurred.

The Chief Environmental Officer says the proximity of fish farms is one angle that the DOE would have to investigate in trying to determine what caused the fish kill.

Alegria said that they have already spoken with a few of the developers in the area and he is hoping that they will be able to conclude their investigations within a week or two.

Fisheries Officer Vivian Ramnarace told us that they passed over the fish kill report and pictures which the concerned villager had taken (and which were reported to them by reporter Marion Ali) to the Department of the Environment, which did the field investigation.

Arreini Morgan, operations manager for Southern Environmental Association (SEA), told Amandala that they also received the report of the fish kill, and one of their research staff accompanied the DOE to the site, but like the DOE staff, saw nothing when they got there.

Alegria explained that the site visit was conducted two days after the initial Facebook report of the fish kill, and this may account for the fact that no dead fish were visible upon their arrival.

The DOE says that in the upcoming weeks, it “will continue to monitor activities in the northwest area of the Placencia Lagoon and also conduct further water quality assessment to determine any environmental change that could likely result in another fish kill.”