Was Queen’s Park Rangers the greatest? 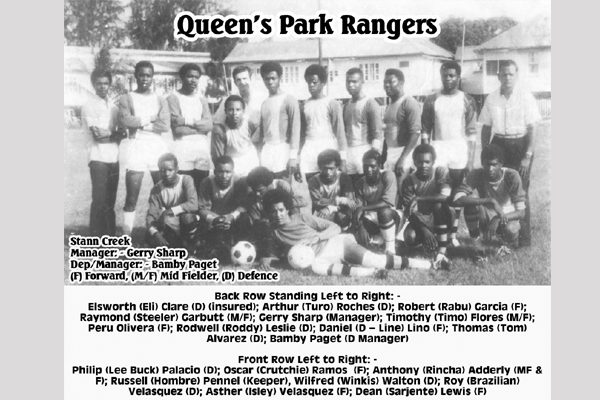 I can recall occasions when sometime around 1 p.m. I would hear a car’s horn blowing where I resided. That car’s horn was that of the young attorney-at-law, Mr. Dean Barrow, who today is the Prime Minister of Belize. We would journey to the M.C.C. Grounds to see Queen’s Park Rangers of the Stann Creek District play against the Avengers of Cayo and San Joaquin out of the Corozal District.

When you considered the standard of football that was being played at that time you would pray that this level would never end, but I was realistic in thought and accepted that all good things had to come to an end. These teams at the time played football as if they were playing music. The footballers’ movements and pattern of play seemed so well synchronized. Have you ever heard a good orchestra play? This is the kind of football I am talking about.

When the Queen’s Park Rangers came to Belize City to play a match they were so exciting and so good that when I left the M.C.C. Grounds there was nothing else that could attract me other than a good sleep. I wished for no food nor drink nor romantic liaison because the Queen’s Park Rangers satisfied all my heart’s desires with their brilliance and competence. I would wake up on the following morning, a Monday, and climb out of my bed still under the influence of the ecstasy from the Queen’s Park Rangers’ performance. One can never understand what I am writing about if you were not placed in the same situation. I have always asked Prime Minister Barrow whether he thought Queen’s Park Rangers were the greatest.

Let me introduce you to Queen’s Park Rangers’ defence line that made every opposing forward line tremble and left frustrated because of their failure to penetrate and convert to goals. The flying standing back, Turo Roches, accompanied by Elsworth Clare, Thomas Alvarez, the legendary Buck Palacio, the young and upstart Roy “Brazilian” Velasquez, Wilfred Walton and the stable and well-known Roddy Leslie, who was on the tail of his career with this Queen’s Park Rangers’ defence line and was also on that 1963 team who had traveled to Jamaica and excelled.

Could you imagine their forward line was made up of: Garrincha Adderly, he also played mid-field and when Garrincha was in the middle of that field moving and rocking and creating plays, the piece of music by Tinga Stewart always came to my mind:

The veteran, Steeler Garbutt, who created a sense of stability. Other players in their forward line included: Daniel “Dundee” Lino who by the way was also on that 1963 team which represented Belize so ably in Jamaica, Dean “Sarge” Lewis, Rabu Garcia, Timo Flores, Peru Olivera, Oscar Ramos and Ishley Velasquez. This was the kind of forward line that the Queen’s Park Rangers Team would present in a game which would leave the opposing team’s defence line “tonti” as hell, and to top it all off this is the kind of Queen’s Park Rangers Team that was successful for 6 consecutive years.

In 1974 the Belizean National Women’s Softball Team went to Santa Domingo and was successful and brought back gold to Belize. It was jubilation all across the country from the man patching the streets to the telephone receptionists in their offices to the C.E.P. and to the politicians both in and out of office. Belize was rocking, rocking to the bone.

Male football, male basketball and other male disciplines were left with their mouths open, but not because the people who participated in those male disciplines were not good: of course they were good! But the opportunities which surround our athletes as I write today were not available to them back then. This Queen’s Park Rangers team alone, without a doubt, could have represented Belize in CONCACAF and they would have been a challenge to any of the other participating nations, and I challenge anyone on this statement.

After the Golden Girls returned victorious from the Pan American Games, the manager who took them to their success, Raymond Lashley, was elected President of the Belize Football Association. Notice that I said “Belize Football Association.” At that time football in Belize was not organized into a Federation linked to FIFA and all its money and resources, as are the arrangements with the Football Federation of Belize today.

During Raymond Lashley’s two-year tenure as Football Association President, it was really like fire on the barracks. Lashley organized an inter-district football competition which saw a very keen contest between the Avengers of Cayo, Landivar of Belize City, Queen’s Park Rangers of Stann Creek and a selection from northern Belize made up of players from Corozal and San Joaquin. All these games were played at the M.C.C. Grounds and when you entered the stadium on any given Sunday afternoon the grounds were as if scorching with fire.

Thousands of fans came in from Cayo, thousands came from the Stann Creek District and thousands from the Corozal District. The Belize City fans were out in large numbers. The M.C.C. was packed to capacity. President Lashley had to arrange for more benches and chairs to surround the field’s perimeter to accommodate the large crowd. The canopied area which provides shade from rain and sun over the bleachers was overflowing with spectators and all surrounding trees had people perched in their branches. Belizeans countrywide were tuned in to the live commentary by sports editor Manfred Atkins on Radio Belize.

It was Avengers from Cayo that drew first blood and if I remember correctly the first half of that game ended 1–0 with Avengers in the lead. In the 2nd half it took a concentrated effort by the Queen’s Park Rangers side to equalize with a scorching shot from Rabu Garcia on the right side of the field. The game was now 1–1. Speedy Henry of Avengers and Turo Roches of the Queen’s Park Rangers had their day cut out for them as both forward lines were driving in their opposing goals.

Late in the second half the veteran Dundee Lino scored Queen’s Park Rangers’ second goal, which became the winning goal ending the game 2–1, and Queen’s Park Rangers remained Champion of Champions. In an interview with my friend Turo Roches he said to me, “Don’t score first on Queen’s Park Rangers. If you do that you will feel excruciating pain. Peru, Timmo, Rabu, Garrincha, Sarge, D-line, and Ishley will all bring down pressure to bear on you.”

That was the kind of Queen’s Park Rangers team I know about. Tough, hard, exciting, constructive, elegant in their passing and a defence line that was the epitome of endurance and stamina. The phrase at the M.C.C. grounds before and after the game was, “It was mountain man against citrus man and the citrus men prevailed.”

In my view the Queen’s Park Rangers team was built around Turo Roches, Garrincha Adderley, Dundee Lino and Peru Olivera and the others rose to the occasion and became stars in their own right. That is what we need. To build a Belize national team around 4 or 5 super stars and find competent players to surround them. I would bet my bottom dollar that if this were done, Belizeans would see a Belizean national team that would hard to beat.

And on that note, when I return I will come back with Pappy Smith and the Avengers of the Cayo District.