Raise of pay for teachers, public servants coming in August 2014 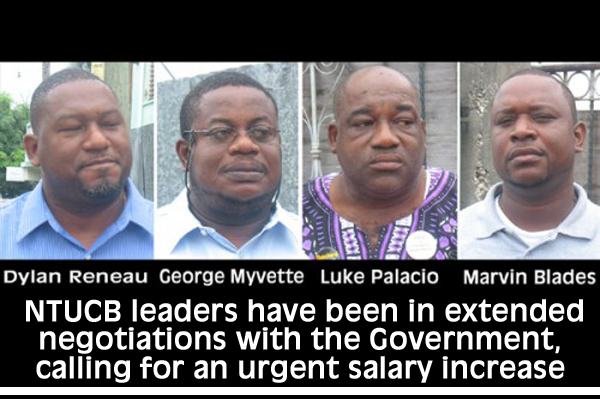 Teachers and public servants have continued to plead with the Government to speedily implement a cost of living adjustment to offset what they say is a rise in the cost of living exceeding 30%; and as the New Calendar Year, 2014, has dawned, Prime Minister and Minister of Finance Dean Barrow used that occasion to announce that those workers will be getting a salary adjustment – just not quite yet.

In his New Year’s Day speech, Barrow said that the headline grabber is the decision of the Government to pay the raise – but not until August 2014, retrospective to April, the start of the fiscal year. He offered no explanation why the raise would be delayed.

The Prime Minister also did not specify the quantum of the raise. He described it merely as “substantial” – pointing to an agreement, in principle, to pay teachers and public officers 50 cents out of every $1.00 government gets in extra revenue.

Barrow also announced that effective January 1, 2014, the National Bank of Belize, which Government had previously said would especially target teachers and public officers for lending, would be expanding its portfolio to include small business and vehicle loans – and the ceiling for business and mortgage loans would be $175,000. Since its launch in September 2013, the bank’s lending ceiling has been fixed at $100,000.

Barrow also announced a rollout of the National Health Insurance Scheme to the northern part of Belize, as well as a subsidy for students sitting CXCs, starting 2014, through which Government would pay for up to six subjects – but only on the basis of need.

Barrow also announced that 2014 would see the reform of the Public Accounts Committee and the reactivation of the Integrity Commission, which has been dormant since 2009.

Of note is that the National Trade Union Congress of Belize (NTUCB), in its New Year’s Day message, listed the dormancy of the Integrity Commission as one of the matters they want to be addressed in 2014; but they will also be clamoring for the Barrow administration to activate a provision in the law for the appointment of a 13th Senator to Parliament.

At his last press briefing, though, Barrow was adamant that no such appointment would be made by his administration, claiming that it would result in parliamentary paralysis.

The NTUCB said that it will also be lobbying for a seat on the board of the Central Bank of Belize.

Last May, the NTUCB, on behalf of the 11,000 workers they directly represent, had asked for at least a 5% salary adjustment, amounting to $18 million.

The NTUCB now says that an increasing number of people can’t make ends meet. It also said that it will fight for changes to effect a living wage, to replace the minimum wage.