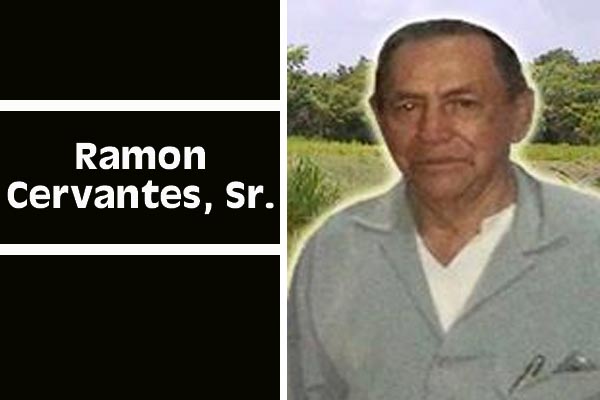 Police and relatives are frantically searching for the cañero, who went to his cane field, but never returned

Both law enforcement authorities and concerned relatives are presently engaged in a frantic search for Ramon Cervantes, Jr., 71, a cañero who went missing sometime yesterday afternoon while working in his cane field near San Roman, in northern Belize.

The family of Cervantes, Sr. – who is the father of recently elected People’s United Party (PUP) standard bearer for the Orange Walk North constituency, Ramon Cervantes, Jr. – was initially alarmed when he (Cervantes, Sr.) did not come home for lunch at 12:00 midday, as he usually did, and they became even more worried upon noticing that he was acting strange and speaking in a different tone of voice when he was contacted via his mobile phone.

Today, in Orange Walk, Amandala spoke with Ramon Cervantes, Jr., who said that when the family realized that something was not right (after a phone call Cervantes, Sr.’s daughter made to him that raised her sense of alarm), they went to Cervantes, Sr.’s cane field, but he was nowhere in sight, after which they did an extensive search that lasted up until the wee hours of this morning, but to no avail.

He said, “My sister called me about 3:30 p.m. to ask me if I had spoken to my dad, because she can’t get in touch with him. She said that she spoke to him briefly, but the call was cut short and he sounded different. So I called him about 5 minutes later, and he answered and told me that his Land Rover broke down at the cane field, and that he was heading to San Jose [Village] for some help. When we went there [to San Jose], he wasn’t there, so I called him back and he said that he was in an unknown part of the village. [However], he knows that village very well and would never say something like that. His voice sounded very tired and weak, almost dragging, and that’s when I knew something was wrong.”

Upon closer inspection of the cane field, the family located Cervantes, Sr.’s Land Rover with its battery missing, and some of his personal belongings, including his spray can with its hose cut, and his boots and hat strewn over some disturbed patches of grass.

“When I went to the field, I found his Land Rover with its tailgate down, and about five cane rows from where the vehicle was, we saw his hat, his spray pump – the hose had been slashed by a machete. We also saw the carton core of a duct tape, some coins and a water bottle, and that gave us the impression that there was some sort of struggle or an abduction”, Cervantes, Jr. explained.

The last time Cervantes, Sr. was heard from was around 4:20 p.m. yesterday, Tuesday, when he reportedly mentioned that he was with an unnamed “friend”, but when they asked to speak with the friend, the call was disconnected, which leaves the family to believe that he was abducted from the cane field.

After the family made multiple phone calls to him, he (Cervantes, Sr.) – who, his son said, was acting differently – repeatedly changed his story, even saying that he would be home by nightfall.

According to Cervantes, Jr., all they can do now is to pray and seek the assistance of the general public to hopefully locate Cervantes, Sr.

“I am optimistic that he will come back. I think this will be resolved at the end of the day, so we just have to pray and wait, and depend on the cooperation of the public to report if they see anything out of the way”, a hopeful Cervantes, Jr. told us.

He appealed to the kidnappers to take care of his father, because Cervantes, Sr. uses daily medication to alleviate some health issues from which he suffers.

Until their investigation indicates otherwise, police are treating the matter as a missing person case; however, Senior Superintendent Joseph Myvette, the Commander of the Northern Region of the Belize Police Department, told the media that police have already sprung into action with additional reinforcements, and will leave no stone unturned.

He said, “We immediately initiated an investigation and search along with the family members and other civilians. As a consequence of the vehicle being found on the farm, and since Mr. Cervantes, Sr. was not found, it became a concern for us. So far, we have not come up with any leads in respect to the investigation, but we are out there, we have several checkpoints and we also sought the assistance of the K-9 Branch and other entities of the police to help with the investigations.”

ASP Myvette is confident that there will be a breakthrough in the case and recalled an incident whereby a child who had gone missing in Corozal was later found unharmed.

We understand that two individuals who work on a nearby farm are currently in police custody pending investigations, and police have so far recorded 6 statements from people within the area, which is called the Mameyal area, off the San Roman Road.

Ramon Cervantes, Sr. is described as being 5 feet 5 inches in height, and as having a dark brown complexion with graying hair and a narrow face, sharp nose and black moustache.

Anyone with information regarding his whereabouts is asked to call the nearest police station.